Ironclad Charge is a Warframe Augment Mod that temporarily increases

Rhino's armor for each enemy hit by 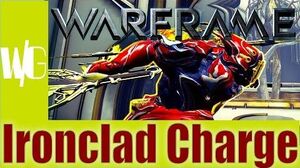