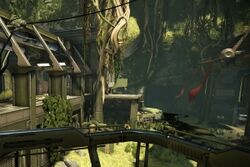 Iron Wake is a Steel Meridian outpost located to the southeast of E Prime on Earth. It was first introduced in Update 21.0.

Iron Wake first appears during the Chains of Harrow Quest as the place where the player regroups with Paladino. It later becomes available to access at any time after the completion of the aforementioned quest. Iron Wake is accessible by selecting Earth in the Navigation Console.

Retrieved from "https://warframe.fandom.com/wiki/Iron_Wake?oldid=1998867"
Community content is available under CC-BY-SA unless otherwise noted.