The Infested Ship is a tileset first featured in Operation Breeding Grounds in Update 13.8, and formally becoming the primary tileset for Eris in Update 14.0. This tileset features an old Corpus ship heavily damaged and taken over by Infested, with enormous biomasses tearing the ship apart from the inside out, in a similar fashion to Orokin Derelicts.

Several tiles in the map are exposed to the vacuum of deep space due to extensive damage to the ship, which will slowly drain shields, and then health over time. There is no way to seal the rooms, and thus players must take care not to spend too much time on tiles suffering decompression. Also, in rare cases the decompression effect may carry over into the next room even if said room normally doesn't have the condition. This tileset is notable for having the only Insertion and Extraction tiles exposed to atmospheric decompression.

The damage caused by the Infestation has rendered the ship's structural integrity unstable. This results in some parts of the ship spontaneously crashing down, which may disrupt player movement.

Certain parts of the ship also have larger than normal Explosive Barrels, either in plain sight or stuck within biomass, that can be shot to destroy the surrounding environment, which can create new paths or reveal secret rooms.

Only found in the Mobile Defense tileset, this blue mist released by a broken trash disposal unit continually deals damage and can inflict

Corrosive proc at times if one stays inside.

Corrosive Mist can be rid off temporarily by opening the airlock mechanism that sucks the mist out (and at the same time players and NPCs nearby).

Exclusive to the Hive mission and depending on the Tumor type the mission spawns, up to three hazards will be chosen randomly between six available hazards: low gravity, laser hazard, turret activation, cryogenic leakage,

Occasionally, the floor MOA Spawners on the tileset will release hostile MOAs, which will attack players and Infested alike on sight. Oddly, while the MOA's deployed are the normal green versions, they are called Corpus Walkers and are capable of releasing Rippling Shockwaves like Shockwave MOAs.

It is also possible for them to disengage from halted conveyor belts on the ceiling, dropping down and proceeding to attack the Tenno and Infested. It is noted that they seem to only be spawned as level 1 however, and are easily dispatched. 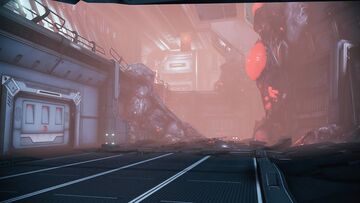 Retrieved from "https://warframe.fandom.com/wiki/Infested_Ship?oldid=2187482"
Community content is available under CC-BY-SA unless otherwise noted.