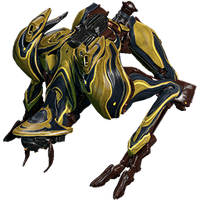 Hyena Ng (Nitroglycerin) is armed with heavy AoE firepower, it will occasionally fire a Blast Grenade capable of knocking down the player. It is also capable of performing Fire Wave, which lights a path of ground on fire and also guarantees Fire proc.

Heat Damage and it is highly resistant to

Heat damage due to its Fire Resistance aura, as stated in its tooltip.