The Hyekka Master is a Grineer unit who can summon Hyekka, vicious Kavat variants that will attack their master's enemies. 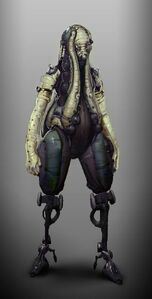