Nav Coordinates 5.64%
CODEX
Trained to hunt down the Infestation.

The Hyekka is a Kavat breed developed by the Grineer for use in combat. It appears to be a hairless version of the Kavat, with a stubbier snout and a stouter appearance. In addition, it only has one tail, as opposed to the many feathered tails that usually adorn the rears of feral Kavats. 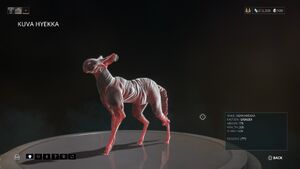 The rare Kuva variant, as seen on the Codex