Hunter Munitions is a set mod dropped from the Hemocyte during Operation: Plague Star and Ghoul Purge bounties, that grants primary weapons a chance to force a

Slash status effect upon a critical hit, alongside any other Status Effect(s), that would have occurred from Status Chance, or a weapon trait. 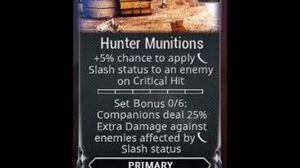