For the enemy, see Hound.

Hounds are robotic canine companions of the Sisters of Parvos. There are currently 3 Hound Models.

The Hounds that accompany the Sisters of Parvos have each of their parts randomly selected on creation of the Sister, and the player will inherit their Hound upon vanquishing their controlling Sister. Vanquished Sisters are also guaranteed to drop one random Hound component blueprint, which can be assembled with Legs' assistance.

A Hound companion needs four different components to be built, the Model, the Core, the Bracket, and the Stabilizer. Each component type has several options to choose from, allowing to customize stats and the Hound's type and appearance.

The Hound's Model forms the machine's head and is the component that earns Mastery Rank points for the Hound after gilding. Each Model comes equipped with one Precept mod and weapon which can only be provided by that particular Model, though the Precepts and weapons can be used on any Hound once acquired.

Bhaira
This model devastates enemies with the

Lacerten weapon and comes equipped with the '

Dorma
This model pierces through enemies with the

Batoten weapon and comes equipped with the '

Hec
This model eviscerates enemies with the

Akaten weapon and comes equipped with the '

The Core determines the appearance of the Hound's torso, and modifies the base stats of the Hound. 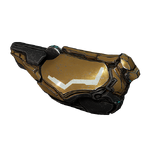 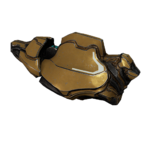 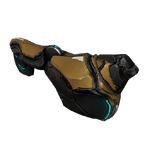 The Bracket determines the appearance of the Hound's legs, and modifies the base stats of the Hound. Each Bracket comes equipped with one Precept mod which can only be provided by that particular Bracket, though the Precepts can be used on any Hound once acquired. 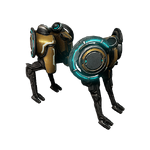 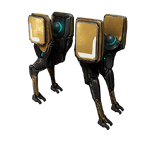 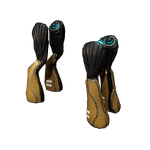 Stabilizer refer to the Hound's tail, and determines the Mod Polarities that the Hound will have. Each Stabilizer comes equipped with one Precept mod which can only be provided by that particular Stabilizer, though the Precepts can be used on any Hound once acquired. 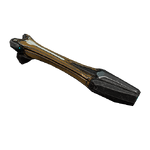 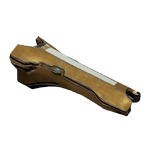 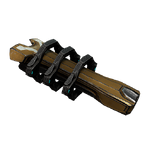 Before players can craft a Hound, they must first obtain the blueprints for the parts they desire from vanquishing Sisters of Parvos, after which these parts must then be constructed at the Foundry. Some of these components require Spectral Debris, which only drops from Errant Specters.

Once the component parts have been crafted, players must return to Legs and select the Configure a Hound Companion option. Here, players must choose the crafted components they have available to form the Hound. Once a Model, Core, Bracket, and Stabilizer are selected, the player will be shown a preview of the Hound's appearance, along with the Hound's stats. If the Hound is satisfactory, players can then proceed with the Build Hound action, which will instantly craft the Hound for 4,000 Credits

4,000. A player must have two Companion Slots available to claim a Hound, one for the Hound itself and one for the weapon its Model comes with. Players can also use the Configure screen to preview builds of Hound components they do not yet own.

A newly built Hound cannot be renamed, customized, Polarized, equipped with a Focus Lens, or earn Mastery Rank experience. However, they can be equipped with an Orokin Reactor.

Once built, a Hound cannot be disassembled to return its component parts.

In order to fully unlock all of a Hound's features, players must gild their Hound. To gild a Hound, players must have a reputation rank of at least Doer with Solaris United, and the desired Hound must first be leveled up to Rank 30. Afterwards, players must return to Legs and select the Gild option under Other Services, which will cost 10 Training Debt-Bonds and 5,000 Standing

5,000. Upon gilding the Hound, players will be asked to first add a Polarity to the Hound, and then finally give it a custom name. This process will reset the Hound's level back to Rank 0.

A Gilded Hound will have all of the functionality available to other companions, and it will have enhanced stats over the newly-built version of the Hound. A Hound will only give Mastery Rank points once gilded.

Visually, the Gilded Hound will have a modified appearance over a newly-built one, sporting a gray coat of paint as opposed to a brown one.

If you’ve engaged in the Adversary hunts with Kuva Liches and Sisters of Parvos, your Foundry might be suffering from some unavoidable clutter. The amount of Hounds and weapons sitting in your Foundry have grown to not only take up room in your list but also within the database itself!

To alleviate this clutter, you can now Sell a Hound and/or Adversary weapon directly from your Foundry without having to claim the item and use a Slot, granting yourself some Credits! Get cleaning up your (H)Foundry. Ordis’ orders!