Become invulnerable for a brief moment after shields are depleted. This ability is restored when shields fully recharge.

Pillage
CODEX
The best defense is a good offense. Hildryn draws from her Shields to fuel her abilities, while Energy recharges her Shields.

Drawing from her shields like a battery, her defensive and offensive utility are unparalleled. This is Hildryn, the domina of armament.

In the sky or on the ground, Hildryn fills her victims full of dread.
—Lotus

Reinforced by her stalwart physique, the Herculean cyborg, Hildryn, fortifies her allies' defenses as enemy barricades crumble beneath her overwhelming might. Rocket skyward at full thrust, achieve atmospheric flight, and launch shield-powered warheads to raze the battlefield with heavy artillery firepower. Hildryn first rained death from above on March 7th, 2019 during Operation: Buried Debts.

Hildryn's main blueprint can be bought from Little Duck for 5,000 Standing

5,000 upon reaching the rank of Agent with Vox Solaris. Hildryn's component blueprints can be acquired from Exploiter Orb.

Hildryn utilizes her advanced Shielding systems to power all of her abilities. Although she has no Energy capacity, her shields boast additional passive benefits and defensive capabilities: 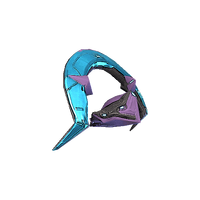 The Balefire Charger is

Electricity that deal area-of-effect damage in a large area, and can be charged to deal more damage. Its massive damage is offset by its low critical chance, critical multiplier, and status chance. 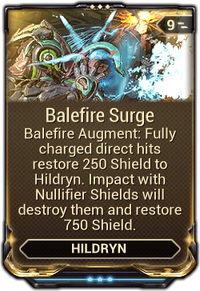 Balefire Surge is a Warframe Augment Mod for

Balefire that allows it to restore shields on direct hits from fully charged shots, and giving the ability to instantly destroy nullifier shields. 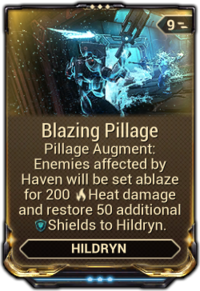 Hildryn can be equipped with the following items: 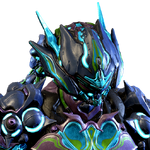 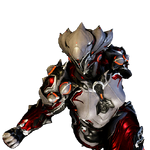 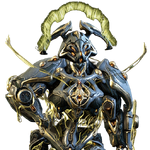 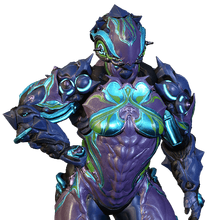 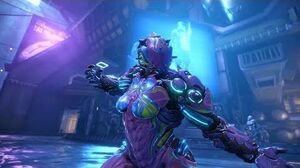 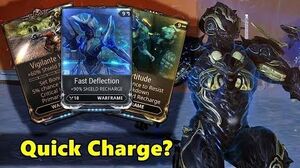