Disgusting, is it not Operator? Ordis would enjoy PURGING THIS ...uh, cleaning this room but sadly this... vile mass serves you and your Warframes. A necessary evil.

(Who nurtures you in your times of rest? Who restores your battle-torn frame, day after day after day? Whose milk enriches your kindred flesh with endless strength and vigor? It can only be me.)

Helminth is a being residing in the Helminth Infirmary of the Orbiter, behind a sealed door that requires special access methods to enter. The Helminth is the being responsible for the ship's "biological functions", namely the behind-the-scenes repair and maintenance of the Warframes.

While the Infestation in the room as a whole is probably part of the Helminth itself, the "main body" of the Helminth can be considered the big mouth attached to the back wall, which it uses to swallow resources. The Tenno can interact with the Helminth's core functions by having their Warframe sit down on the infested chair in the center of the room.

It is revealed during The Sacrifice by Executor Ballas that the Helminth was created by the Orokin to convert human subjects into Infested-hybrids, giving birth to Warframes. According to Ballas' Vitruvian, when a subject is exposed to a Helminth strain, it transforms their skin into sword-steel, as well as interlinking their internal organs into untold resilience, while at the same time preventing the same infestation from destroying their mind.

At the center of the Helminth Infirmary is a chair that Nidus can sit on. Should the player choose to sit on the chair (in spite of Ordis's protests), a needle will inject the left side of the Nidus' neck and will release it afterward. This will infect him with the Helminth virus, and also "awaken" Helminth in the Infirmary, triggering its communications to the Tenno. 24 hours after the injection, a small, pink, Infested cyst will start growing at the site of injection. The cyst will continue to grow in size until 7 days have passed, at which point it will be fully matured, as seen by the small tendrils sprouting from its surface. The player may drain the mature cyst while incubating a Kubrow to breed a new type of Companion, the Helminth Charger, from the Orbiter's Incubator Segment; a new cyst will appear 24 hours after draining it.

As long as Nidus is infected, any Warframes that come into contact with him will also contract the Helminth Virus. Players will know if they have been infected when they hear an 'injection' sound, and are briefly surrounded by a light, brown cloud. After 24 hours, the same cyst will appear on the newly infected Warframe. The now-infected Warframes can also spread the virus to other Warframes the same way as Nidus.

However, the virus can only be spread during missions, in a Clan Dojo, or in a player's Orbiter, and cannot be spread in Relays. Infected players can also spread the virus to players who have yet to complete The Glast Gambit or any of its prerequisite quests (namely The War Within).

In order to cure an infected Warframe of the virus, the player can enter any Warframe carrying a cyst, regardless of whether it is immature or has fully grown, into the Helminth Infirmary and interact with the chair and cure them of the infection. This not only removes the cyst from the Warframe but also inoculates them against further infection. This also prevents the inoculated Warframe (except

Other than affecting the Warframe's appearance, the Cyst has no positive or negative effects.

The Helminth has the ability to replace Warframe Abilities with those of other Warframes or even unique ones. It can be accessed through the Helminth Infirmary on the Orbiter, requiring a Helminth Segment purchased from Son in the Necralisk for 15,000

‍15,000 and requires Mastery Rank 8 and the Rank of Associate with the Entrati.

Once the segment has been built, the Helminth Infirmary will be permanently open, even without the Cyst, and the ability to Fast Travel to the Helminth becomes available. Upon sitting on the chair to install the segment, the player is prompted to name the Helminth. The Helminth can be freely renamed using the console to the left of the entrance.

Subsume your Warframe into the Helminth System, learning one of its abilities.

WARNING
Your Warframe will be consumed in the process.

—In-game description
Any built non-Prime/non-Umbra Warframe can be sacrificed to the Helminth, freeing an inventory slot while doing so. After 23 hours, the sacrificed Warframe will have one predetermined subsumed ability, as listed in the chart below, available for use through the Helminth. This permanently unlocks the ability to replace another Warframe's ability with said subsumed ability. For example, sacrificing a single

Pull, to be used on any other Warframe. Passives are not affected by the system.

Note that the Warframe does not have to be at max rank in order to be subsumed. Only one Warframe can be subsumed at a time, and the process can be rushed for

‍50. There is also a limited number of subsumed abilities the Helminth can hold, which can be increased with the Helminth's Metamorphosis rank. The same Warframe cannot be subsumed more than once.

To subsume a Warframe, the currently equipped Warframe must be brought to the Helminth Infirmary. Sitting on the chair will prompt an option to "Subsume Warframe", with a note that the chosen Warframe will be consumed. Selecting this option will display the Warframe being sacrificed and their ability being taken, and prompts the player to type CONFIRM to confirm the subsuming. The sacrificed Warframe will then be rendered inert and held in the back of the room by the Helminth's tendrils to be slowly absorbed into its biomass, and the player will have their oldest Warframe auto-equipped.

Once fully subsumed, a Lotus flower with its colors matching the sacrificed Warframe will appear in the infirmary. If no colors have been modified, the flower will use the Warframe's default colors.

In order to subsume a Warframe or replace Warframe abilities with a subsumed one, the Helminth must be fed a certain number of resources from different categories to start the process. Almost all resources in the game can be used to feed the Helminth, which are then converted into specific Secretions which are then spent for various Helminth functions. Different resources generate different types of Secretions, which are consumed when feeding Helminth.

The Helminth has a preferred diet of resources that it wants which affects the efficiency that the resource is converted into Secretions. Note that the Helminth starts out liking all available resources.

The Helminth will progress from liking a resource, to neutral, and finally losing appetite if the same resource is fed to it consecutively. Feeding order can also affect the number of resources that are converted: if the Helminth is fed a resource that it likes, feeding it with a different neutral or disliked resource will boost the conversion amount for them by a small amount.

The maximum amount of any Secretion is 100%. Topping off will cause any excess to be wasted.

Over time, Helminth's appetite for consuming certain resources will gradually increase as long as those resources have not been fed to it. It will take 24 hours for a resource to go from fully red to neutral and another 24 hours from neutral to fully green.

Once Helminth subsumes an ability, it can replace any chosen Warframe's ability, including those on Prime or Umbra variants, via an injection. However, each Warframe can only have one subsumed ability, from either a Warframe or Helminth, per loadout configuration. Players can choose which mod configurations the injected ability can be used in. For example, an

Excalibur Prime could have

Xata's Whisper can only replace

The appropriate Warframe Augment Mods can be installed on the Warframe with the injected ability.

Ability changes are reversible, but Secretions consumed from the injection are not returned and re-injecting the ability will still have costs. It is also not possible to swap subsumed abilities around replaceable abilities and loadout configurations without removing and re-injecting the subsumed ability. For example, if Pull is slotted onto Radial Javelin on the first mod config slot, Pull cannot replace the other three abilities to return Radial Javelin, nor can it be moved onto the second or third mod config slots, until Excalibur returns to the Helminth to remove and re-inject Pull.

Note however, that the game won't tell you when placing an ability on a already occupied mod config slot. The infusing process goes as usual, so keep that in mind.

Feeding resources, subsuming Warframes, and injecting abilities using the Helminth will upgrade its Metamorphosis rank. Each rank gained will increase the number of held subsumed Warframe abilities as well as unlocking a unique Helminth ability for use.

The Helminth possesses its own set of unique abilities unlocked by ranking up through Metamorphosis. These abilities have their own stats and functions, allowing the player to customize their loadout further. Only one Helminth ability may occupy one ability slot in a loadout configuration at a time. Helminth abilities also count as an ability replacement preventing other subsumed Warframe abilities from occupying the same ability loadout. 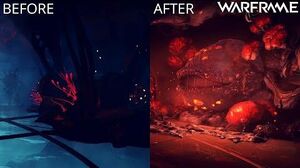 Warframe - Helminth Room - Before & After Heart of Deimos 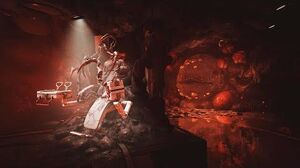 TennoCon 2020 Helminth Chrysalis
Add a photo to this gallery

There will be a reduction in the batches of Railjack Resource Costs across the board required to yield Helminth Secretions.

The changes are as follows:

Additionally, anyone with Helminth installed and Railjack owned will receive an Inbox of Resources after the Hotfix goes live that includes the reduced costs. A perfect script is not possible, but a generous grab bag is! If you meet the criteria, you will receive the Resources via Inbox after the Hotfix date. We’ll let you know in this thread once the Inbox script has completed - stay tuned!

To give players more options for the Bile Secretion, we are adding the following components as feedable to Helminth to create Bile:

Before we jump into the nitty gritty, let’s revisit what the ‘Marked for Death’ Helminth Infusion is: Stun an enemy; a portion of the next damage you deal to it will be dealt to all enemies around it.

It’s important to note that the description mentions ‘a portion of the next damage’, which was always our intent, meaning we have some bugs to fix and explanations to make on the next steps here.

With Marked for Death now in the wild and being experimented with, it was apparent to not be working as intended by overwhelmingly nuking enemies left, right, and center when combined with certain loadouts and due to certain bugs. We recognize the players who brought this forward with understanding that it needs to be addressed. Let’s get into the meat of it:

Customize your Warframe’s Abilities at a depth never experienced before in Warframe! Introducing THE HELMINTH.

The Helminth System is an expansion of the Helminth room on your Orbiter - you may only know this room as an infested space that allows you to remove the Helminth Cyst. With the ‘Heart of Deimos’ Update, that’s all changing. The Helminth system enables you to customize your Warframes by infusing new Abilities in place of existing Abilities.

Once you’ve unlocked The Helminth System, you can fast travel to the Helminth Infirmary under the Equipment pause menu!

Retrieved from "https://warframe.fandom.com/wiki/Helminth?oldid=2163822"
Community content is available under CC-BY-SA unless otherwise noted.