“It's taking longer than I calculated.”
This page is actively being worked on and may not be completely correct. Please assist in making this page accurate.
Missing : Spoiler mode's energy / New waypoints for particular resources such as Sentient Cores / Teammates tab image with details about teammate's energy left / Teammate in affinity range icon.
Discussion:Thread:1263149#3

The Heads-Up Display, or HUD, is a set of indicators used in WARFRAME to show the player's current status in a game, as well as other important information at a glance. HUD features can be toggled in the Settings menu.

The gameplay HUD is the primary player HUD during a mission, which displays relevant information regarding the status of a player's Warframe, Weapons, and other information. The various elements are shown as above:

This section of a player's HUD displays information related to a Warframe's vitality and buffs, which includes:

If the player has a Companion (Sentinel, Kubrow, or Kavat) equipped, this section will display the relevant stats for the Companion in a fashion identical to the player's own as outlined above.

Displayed below the Weapon Stats, this section displays relevant information regarding the Warframe's energy and abilities.

The Minimap located at the top left of the HUD is a navigation aid that displays the player's current position in relation to their environment, as well the position and locations of other important elements in the mission.

From center to the edge the dimensions are horizontally 50m, vertically 30m, and to the very corner it's around 60m. In other words, the minimap covers a 100 by 60 meter area centered around the player.

Information about the mission's current objective is displayed beneath the minimap. Its contents change depending on the current mission type, and can display various amounts of information from the number of enemy targets remaining, to life support levels.

Waypoints are on-screen icons that guide players to a certain location or enemy. The waypoint icons will match the icon displayed in the minimap and can be created by either the mission itself or from another player.

The Aiming Reticle, shown as a small white dot, is displayed at the very center of the player's screen, and is used to determine where the player's weapons and abilities are being aimed at.

This counter at the bottom left of the screen shows the game's current graphical performance. This can be activated within the game's Settings.

The chat box can be accessed by pressing the T  key or clicking on the "T" icon in the lower left corner. This will bring up a chat screen with multiple tabs. Tabs include: Clan Chat, Alliance Chat, Squad Chat, Player Hub (Relays, Dojos, etc.) Chat, Region Chat, Recruitment Chat, Trade Chat, Council Chat (only available for players who have been chosen to join the Design Council), and tabs for any direct messages between two players. The chat box can be closed either by pressing Esc  or clicking the minimize button (-) in the upper right or clicking anywhere else besides chat box.

Chat commands are typed in line with the message with a single space between the command and the message.

Progress towards certain Nightwave challenges may appear here. The challenge name, description, and current progress is displayed in a grey box in the bottom center of the screen at the beginning of each mission. This box will fade away after about five seconds, but can be viewed again in the Menu (Esc ).

Various icons can appear while a player is in the Orbiter to display certain information. These icons will periodically flash on the upper right corner of the player's screen, and will rotate between various applicable states. If there is only a single icon appearing, it will stay frozen on the player's screen.

As of Update 29.10 (2021-03-19), players can change the color scheme of their HUD through the Settings. Players can individually recolor certain HUD elements using colors from owned Color Picker Extensions or choose from ten preset color themes provided by the developers:

Here is a list of what players can customize: 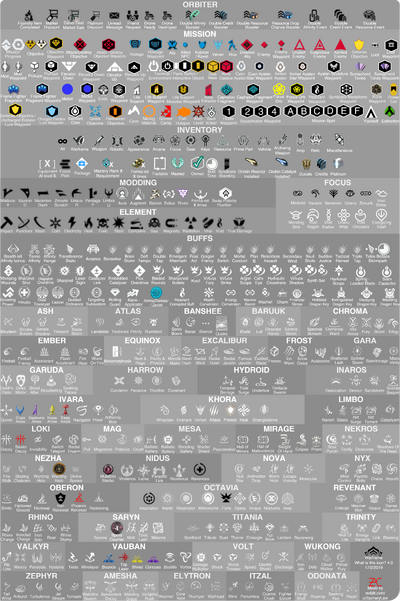 Spice up your HUD with your very own HUD Customization options! Choose numerous HUD elements to recolor from your Color Palettes. You can also choose from a collection of presets that range from Color Blind friendly choices to Warframe-themed presets.