Guide Zephyr to safety as she flaps her way through a series of ever more difficult obstacles.

Zephyr to guide her across the obstacles.

Players can access Happy Zephyr by purchasing a Ludoplex from Cephalon Simaris for 50,000 Standing

50,000 and putting it as a decoration in their orbiter, along with the game itself for 25,000 Standing

25,000. Alternatively, players can type in Flappy as the email address in the login screen and leaving the password blank, or by equipping the Zephyr and selecting the "Z" loadout under Appearance. The highscore of this minigame can be seen in the leaderboard by entering player's Profile tab.

Achieving 50 points in Happy Zephyr will grant the player a Happy Zephyr Poster decoration that can be placed within the Orbiter.

The objective is to direct a Zephyr, which moves continuously to the right through a Corpus Ship, between each oncoming set of obstacles without colliding with them, the ceiling and the floor; which otherwise ends the game. Zephyr shortly jumps mid-air with Tail Wind

Tail Wind each time the player presses space. Without player-input, Zephyr will fall due to gravity. The player is scored on the number of obstacle sets Zephyr successfully passes through.

There is no variation or evolution in gameplay throughout the game as the obstacles always have the same gap between them and there is no end to the running track, having only the Tail Wind, click sounds and the rising score as the rewards. 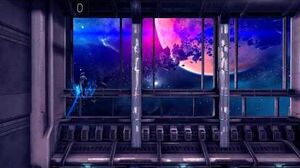