Similar to Mars, Grineer units here are variants known as Frontier units, equipped with the

Karak and forest camo. Wild fauna are also present in the form of Feral Kubrow, dog-like creatures that will attack anything that gets too close to their burrows.

Introduced in Update 11.5 as part of The Cicero Crisis, during which Councilor Vay Hek attempted to destroy the forests using the Cicero Toxin.

This hazard is only found in defense missions, it appears as a form of exhaust on an industrial chimney. Climbing up to the chimney may damage your Warframe. This also affects

Tail Wind when she launches to the sky too high. Oddly enough, Slash may sometimes be procced despite the lack of presence of physical hazards. 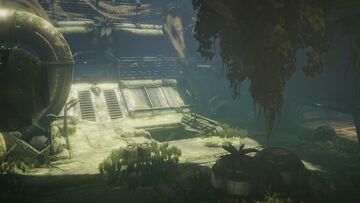