CODEX
A cutting-edge, halogen-cooled electron accelerator capable of snap-freezing a target in moments.

The Glaxion Vandal is the Vandal variant of the

This weapon was awarded for earning 4,000 points in a single Endurance Disruption Mission in Operation: Hostile Mergers, complete with a free weapon slot and a pre-installed Orokin Catalyst.

Was re-obtainable by watching a livestream from any channel in The Game Awards directory with a Twitch-linked account for 30 consecutive minutes on December 12, 2019.

Drop was re-deployed by watching Prime Time episode 273 with a Twitch-linked account for 30 consecutive minutes on December 19, 2019.

On June 5th, 2020, the weapon is now potentially sold by Baro Ki'Teer in the Concourse section of the Tenno Relay for 250,000 Credits

475. Note that Baro Ki'Teer's stock changes with each appearance, and this weapon may not be available on a succeeding appearance.

The version sold by Baro Ki'Teer can be traded, but only when unranked and without Forma or Orokin Catalyst installed. The trading recipient must also have a Mastery Rank of at least 12. 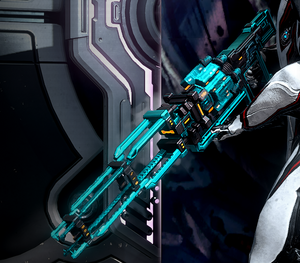 Glaxion Vandal ,shown in the Arsenal 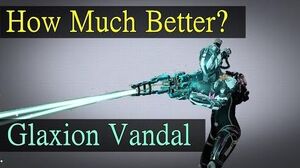 Glaxion VS Glaxion Vandal How Much Better Is It? (Side-By-Side)