Sudden terror... the element of surprise… and cheaply bought. Ghouls are shock troops, fast-grown in diapause bags, cultured from repurposed Grineer gene slurry. The key to victory is quantity over quality. A tide of claws and flesh to crush any enemy foolish enough to stand before it.
—Sigor Savah in 'A Tide of Claws and Flesh' Ghoul Fragment

The Ghouls are hastily-bred Grineer clones grown in diapause bags dropped in from space and buried in the ground. These deformed monstrosities may be lacking in typical qualities like intelligence, sanity or longevity, but their sheer numbers, ferocity and deadly weapons more than make up for it. With paralytic blood, ghouls remain a threat even after they have died.

They exhibit primitive, animalistic pack behavior, bursting out of the dirt and savagely attacking anyone who trespasses on their burial sites. Although they may be found in the plains, they may appear in greater numbers during a Ghoul Purge. They are the favored creations of Councilor Vay Hek, who refers to them as his "children."

All Ghouls have "paralytic blood", which is released upon death as a cloud that inflicts

Cold proc has a reduced duration of 2 seconds, but the

Toxin proc should be treated with caution as they can quickly sap a Warframe's health, especially in melee combat.

Ghouls are also common enemies among other Grineer troops encountered in Olympus, Disruption node on Mars.

There are four variants of Ghouls: 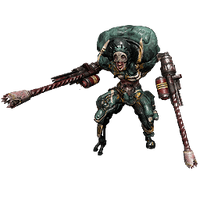 The Ghoul Auger is a Grineer Ghoul armed with drills that allow it to quickly dig underground and ambush their foe. Attached to these weapons are fuel canisters, doubling as a flamethrower. As with all Ghouls, on death they will release a cloud that inflicts 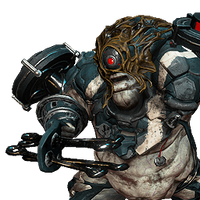 The Ghoul Devourer is a Grineer Ghoul that is considered Vay Hek's personal favorite. Despite its massive girth, it is armed with a powerful wrist-mounted hook that allows it to close the distance between it and its target. As with all Ghouls, on death they will release a cloud that inflicts 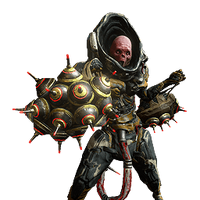 The Ghoul Expired is a Grineer Ghoul that suffered from malnutrition or poisoning during the early parts of its development, causing their nervous systems to drive them forward and function as an ideal suicide troop. Aiding them in this task are a pair of shields with multiple bomblets strapped on. As with all Ghouls, on death they will release a cloud that inflicts 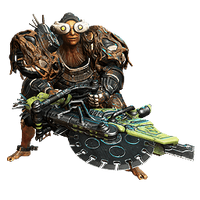 The Ghoul Rictus is a Grineer Ghoul armed with a

Ghoulsaw. These saws can be ejected similar to the

Panthera's Alternate Fire, traveling a distance before returning to them. The Rictus also has the uncanny ability to ride on the ejected saws, allowing them to approach and ram their enemies from afar. As with all Ghouls, on death they will release a cloud that inflicts

While not of Vor’s design, the General uses the ghouls to good effect.

Credit for the development of these horrors goes to none other than Doctor Tengus: father of the infamously unstable Grustrag 3. Developed in his laboratories, against the wishes of Vor himself, and with the funding of a certain ill-fated Councillor... the Ghouls are Tengus' crowning achievement.

They have secured the Doctor’s place in the good grace of the Grineer Queens.
—Sigor Savah in 'Doctor Tengus' Ghoul Fragment

Dr. Tengus created these vicious Ghouls with the help of Councilor Vay Hek.