General Sargas Ruk is the Grineer boss of the Saturn system. The head of one of the Grineer Artifact extraction projects, Sargas Ruk was targeted by the Lotus for annexing Tenno-controlled dig sites. Ruk enjoys Grineer augmentation, even going as far as replacing the lower part of his right arm with a massive flamethrower and his normal vision with a single augmentation in the center of his helmet.

Ruk is fought in the mission Tethys, Saturn. After defeating him and finishing the mission, the player will receive an

Ember component blueprint. He has an increased chance to drop an Orokin Cell upon death since it can also drop it as a normal planet resource.

At some point before the beginning of the Warframe era, Sargas Ruk was promoted to a General for his "formidable performance in crushing the Insubordination of Saturn".[1] His former rank is unknown. According to The Lotus' mission briefing, Sargas Ruk had been raiding and annexing Tenno-controlled dig sites in the region in search of Orokin artifacts.

Though he is claimed to have an extremely xenophobic behavior, he has shown a strong sense of honor. This was seen during The Gradivus Dilemma, as he occasionally remarked his admiration (albeit in a condescending tone) for the Tenno supporting the Grineer. When other Tenno supported the Corpus, he made remarks about Alad V's treacherous nature and about the Tenno being willing to sacrifice their own kind to Alad's experiments. This respect for honor carried over to his assassination mission, as he labels his would-be assassins "mercenaries fighting for scraps". He also shows contempt for The Grustrag Three.

Ruk shows considerable difficulty in conversing properly, speaking in a forceful, fragmented manner, and often mangling his figures of speech (most infamously, his "greedy milk" declaration). It is unknown if this is the result of genetic deterioration or just general difficulty with language.

Shik Tal's codex entry reveals that Ruk was against the release of The Grustrag Three, reminding Vay Hek that the Three's violent actions before their incarceration had cost Ruk some of his soldiers and that they should have been executed for their treachery. He also warned Hek that their worsening insanity and unpredictability would be the death of him.

General Sargas Ruk once had a medical officer under his command named Dok Thul. As the medic failed to save the life of one of the general's favored officers, Dok Thul was "reassigned" to service under Kela as an Executioner of Rathuum, presumably as a punishment.

Upon hearing the news that Alad V had discovered a cache of dormant Tenno near Sedna, Sargas ordered Alad to hand over the cache to the Grineer, on the grounds that the Tenno were found in their territory. Alad refused and set up defense forces on Mars to prepare for the impending assault. Angered by Alad's defiance, Ruk demanded that all Corpus territories to be handed to the Grineer or there would be swift consequences.

When the Lotus received the news, she refused to sway the Tenno to either side and instead left them with two options: side with Sargas Ruk to rescue their fellow Tenno (at the cost of the Grineer getting more territory), or side with Alad V to drive out the Grineer (letting the dormant Tenno fall victim to the Zanuka Project). After several offensives, Alad lost financial support from the Board of Directors, forcing him to pull out of Mars and give the Grineer victory.

When an allied convoy of ships is overrun by the Infestation, the Tenno are dispatched to rescue the surviving crew members. The crew consisted of Kavor Defectors, Grineer soldiers that could no longer bring themselves to kill for either Ruk or Steel Meridian, and would prefer to live out their lives in peace. As the Tenno evacuate the survivors, Ruk declares his disdain for the Defectors and, while he is initially content with leaving them to their fate, he ultimately sends out Manics to kill them as the Tenno redouble their efforts. Though some of them are lost, the Tenno manage to rescue the majority of the crew members, though smaller-scale evacuations (and thus Ruk's attempts to sabotage them) continue.

With the help of the Tenno, Steel Meridian decides to rebuild a Relay that was destroyed during Operation: Eyes of Blight (the Strata Relay in the PC, XB1, and NSW builds, or the Larunda Relay in the PS4 build). When Ruk hears of this, he initially threatens the Tenno into abandoning their tasks, but when the Relay is nearly complete, Ruk leads his troops to besiege the Relay, and the Tenno are called upon once more to defeat him.

Throughout the event, particularly during the siege of the rebuilt Relay, it is revealed that Cressa Tal, the founder of Steel Meridian, once served in a powerful position under Sargas Ruk's command. Ruk evidently still nurses a particularly strong grudge for Tal's betrayal, as he was willing to release The Grustrag Three to interfere with the reconstruction effort even in spite of his disdain for them.

Angered by the presence of Sentient and Tenno alike when the former launches an invasion on the Origin System, Ruk sieges his troops on both factions. In spite of the Tenno working to benefit the Grineer by repelling the invasion, Ruk blames them for the Sentient's presence much to Little Duck's frustration.

General Sargas Ruk has undergone extensive cybernetic modification compared to most Grineer; apart from his armor (which has three different heat exhausts mounted on his left shoulder, his chest, and his back), both his legs and his left arm have been replaced with cybernetic equivalents, while his right arm has been replaced altogether with a hybrid flamethrower/napalm cannon. His normal vision was replaced with a single augmentation in the center of his helmet as well.

General Sargas Ruk's armor is impervious to all damage except for blue exhaust spots that periodically open during his attacks. He has three exhausts that only open in a set order, each representing a third of his health bar.

The first exhaust is mounted on his left shoulder. Once destroyed, he will start using Fire Blast and the second exhaust will open at his chest. After the chest generator is gone, he begins to use Eruption and the third and final exhaust opens on his back.

The Tenno only need to wait for Ruk to expose his weak spots, while carefully avoiding attacks from Ruk and his reinforcing Grineer soldiers. 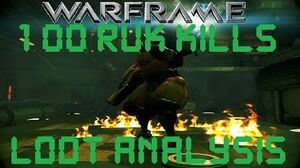 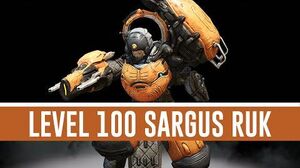 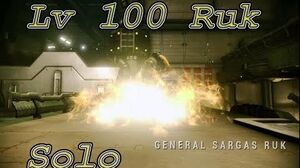