This is Gara, the unbreakable warrior. Manipulator of glass, she fractures the resolve of her enemies.

The shattered remains of her enemies are all that Gara leaves behind. Tread lightly.
—Lotus

What is known of the ancient warrior known as Gara comes to us from folklore and oral tradition. It is said that she was Unum's closest companion, and that when the Lotus instructed her children to flee Gara remained, refusing to leave the side of the one she loved best.

When the Sentient was done razing a great many other Towers, when it turned its myriad eyes and receptors toward the Unum, it was Gara who gave herself to protect her friend - shattering the Sentient. The mindless monstrosities that now stride the Plains - the Teralysts - are all that remain of it.
—The Glass Warrior Fragment

Gara's main blueprint will be awarded upon completion of the Saya's Vigil quest. Gara's component blueprints are acquired from Plains of Eidolon Bounties.

“You're not supposed to be in here! You're going to ruin the surprise!”
The following article/section contains spoilers. Please complete Saya's Vigil quest before proceeding.

Grineer! Spread out! Crawl if you have to! I need more glass! It is the key to a power I've never seen! The power to kill... a Sentient!
—Vay Hek

Gara, the Glass Warrior, served the Unum, a mysterious and reclusive being whose Orokin Tower-body was beset by a massive Sentient. This Sentient, whose powers waned between dusk and dawn, would attack the Unum's Tower by nightfall and retreat by morning. Forbidden to attack the Sentient at the peak of its power, Gara would search for the colossal being during the daylight. To aid in her search, the Unum seeded Temple Kuva to the wildlife, which would connect their consciousness and allow the Unum to discover the Sentient's hiding place.

However, the Sentient captured the fauna and discovered it could use the Kuva to restore its long-lost ability to reproduce. Thus, its attacks escalated, forcing Gara to take decisive action. Carrying a bomb in her chest, Gara gave her life to destroy the Sentient as it descended on her mortally wounded body, detonating the bomb and scattering the Sentient across the land that would be known as the Plains of Eidolon, ending the threat to the tower. However, the threat of the Sentient still lingers, taking the form of the mindless Eidolons that wander the plains at night in search of its missing fragments to become whole once more.

In present day, the Ostron researcher Onkko from Cetus disappears in an effort to prevent Gara from falling into Grineer hands. His wife Saya accepts the Tenno's help to find Onkko, coming across a case locked with a glass key. While finding the glass fragments needed to open the case, the Lotus performs a harmonics sweep on the glass key and discovers a blueprint for Gara hidden within.

https://www.warframe.com/droptables
CODEX
Continue the legend of the glass-armored warrior Gara. Dominate the battlefield with the power and purity of crystal.

Of all our sleek gargoyles, our Void-born masquerade, how to honor the one who volunteered willingly, knowing the truth? Whose little act of courage - twinkled like a petty Ayatan, before our golden indifference?

And Nihil cried: "Glass her, for her presumption!" Until the arches rang with laughter. So be it. I shall encase you in crystal most fine. That the purity of your stigmatization might shard the sunlight itself.

Gara Prime is the Primed variant of

Gara, possessing increased Health and Armor, as well as an additional

Polarity. Gara Prime was released alongside 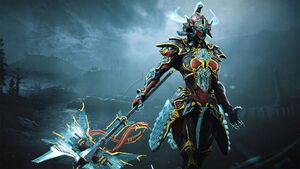 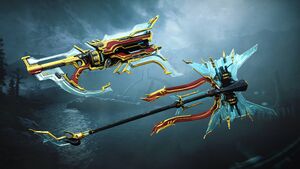 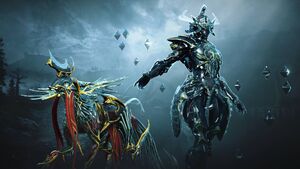 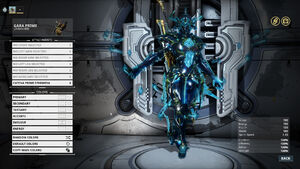 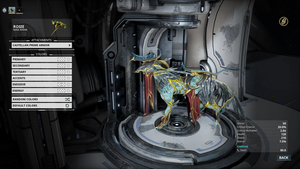 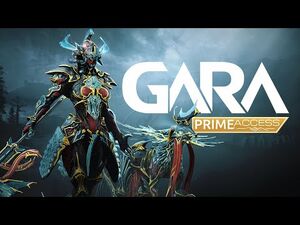 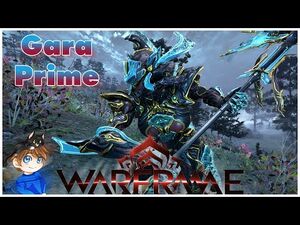 While standing in light,

Gara's glass body has a chance to blind enemies within 12 meters for 10 seconds, exposing them to Melee Finisher attacks. 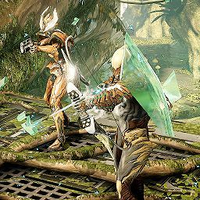 Mending Splinters is a Warframe Augment Mod for

Splinter Storm that causes it to heal friendly targets it's applied to, with the healing being increased for every target (friendly or not) affected by Splinter Storm for a short time. 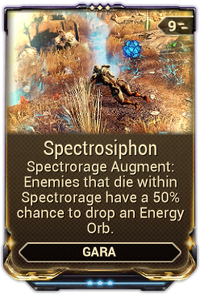 Spectrosiphon is a Warframe Augment Mod for

Spectrorage, that makes enemies that die within its influence have a chance to drop an energy orb.

Gara can be equipped with the following items: 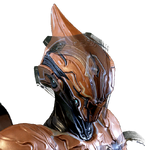 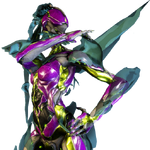 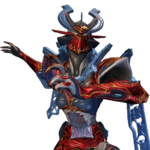 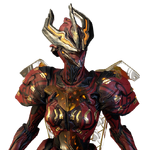 PLUS! As an added Gara QoL change, her glass armor no longer disappears during Splinter Storm!

You have requested many times (many, many, times) to have a UI toggle that will give you control over whether Gara's glass armor parts will "shatter" while using Splinter Storm. You want to use this power all the time, but it makes your warframe look so much less... shiny when you do.

Given how persistent and unified this feedback is, we've decided to simply make this power not remove her armor plates while it is active. Adding a toggle adds significantly more complexity to the code and significantly more chances for things to break than just not having the effect at all.

We hope this change will be appealing to everybody living on the cutting edge of Gara fashion. 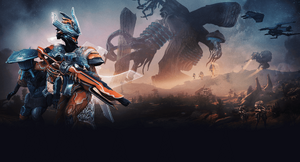 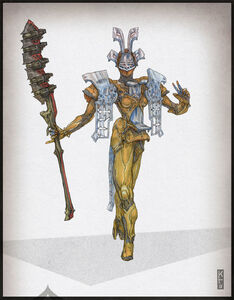 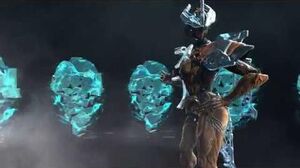 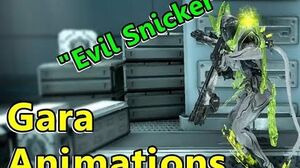 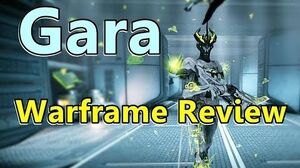 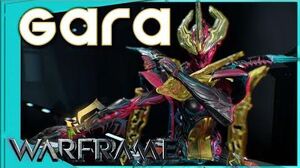