MK1-Furis
CODEX
The Furis delivers a high damage output in a short time frame thanks to its high rate of fire.

The Furis has a high rate of fire, causing an outcome of a high damage output, sacrificing ammo.

The Furis's blueprint can be purchased from the Market. Alternatively, it can be acquired from completing the Earth to Venus Junction. 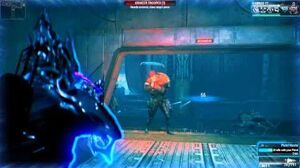 Retrieved from "https://warframe.fandom.com/wiki/Furis?oldid=2186008"
Community content is available under CC-BY-SA unless otherwise noted.