Furious Javelin is a Warframe Augment Mod that temporarily increases

Excalibur's melee damage for every enemy hit by 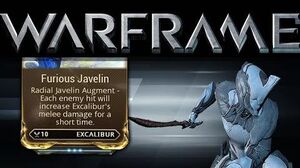 Excalibur: Furious Javelin
Before: Each enemy hit would increase Excalibur’s Melee Damage by 10% for 16s
New: Melee damage is now increased to 15% at maximum Rank.