Frohd Bek is the current Chairman of the Corpus Board of Directors and the father of Darvo. Though players have yet to directly encounter him, Bek's interactions with the Tenno have been the catalyst for several events.

Unlike other members of the Corpus Board, Frohd Bek tries his best to maintain a neutral relationship with the Tenno, fully aware that their wrath would be best avoided. As such, he typically prefers to stay out of their way unless a mutually beneficial proposal can be agreed on. He is still a Corpus businessman at heart and will oppose anyone, Tenno included, if he feels that he has an advantage, as demonstrated in Operation: Ambulas Reborn.

The Hunt For Alad V[]

After the Corpus's defeat during The Gradivus Dilemma, Frohd Bek tracks down Alad V to Jupiter in order to claim Alad's debts generated from both the Dilemma and the Zanuka Project. Alad retaliates by diverting the Infested to Frohd's ships, impeding his progress. Frohd Bek contacts the Lotus and proposes that the Tenno help him clear out the Infestation in exchange for Alad's location, revealing his own motivations for tracking Alad down; to prevent him from getting more power in the Board via the Zanuka Project. The Lotus reluctantly agrees to Bek's offer, as Alad has a captive Warframe in his possession and The Lotus wishes to rescue her. The Tenno clear out the Infestation, confront Alad, and rescue the Warframe, allowing Bek to safely collect Alad's debts.

Darvo contacts the Tenno to rescue him from the Corpus, and during the escape Frohd Bek contacts Darvo, pleading his son to stay with him. He had been grooming Darvo to take a seat in the Board (most likely Alad's then-vacant position) and is angered when Darvo refuses, forcing Frohd to detain him. During his pleas, Frohd mentions that "Project Tethra" will be the death of them, which was later revealed to be Vay Hek's attempts to rebuild the Fomorian fleet in order to force the Corpus into submission.

Searching for information regarding Hek's Fomorians, the Lotus sends the Tenno to a Corpus ship (with Frohd Bek onboard) in order to find more details. The investigation is cut short when Hek ambushes Bek with his Fomorian Fleet, forcing the Tenno to retreat. During the ambush, Hek boastfully severs his business contracts with the Corpus, though it is unknown if they were reinstated following Hek's defeat during Operation: Eyes of Blight. Frohd Bek presumably escapes the Fomorian attack.

Frohd Bek contacts the Tenno regarding the Black Seeds, a splinter group of Corpus merchants that seek to undermine the Board's efforts. He explains that the Black Seeds have raided Alad V's Mutalist labs and have stolen Juggernaut spores, intending to unleash these spores on Bek's facilities. Frohd Bek asks the Tenno to halt the spread of the spores by capturing key Black Seed Operatives to narrow down the Juggernaut's location and destroy it. The Tenno succeed at halting the spread and the Black Seeds are forced into hiding, though as Bek thanks the Tenno he warns them that some of the Juggernaut spores may have been released to the wild, urging them to stay on alert.

Frohd Bek, with the help of numerous investors, decides to revamp the Ambulas proxy and makes use of an AI processor called Animo, which learns from encounters in the field and effectively makes future Ambulas proxies harder to fight against. Fearing that Animo's uncontrolled learning could lead to another rampant AI problem like the Sentients before it, Ergo Glast, leader of The Perrin Sequence and Animo's creator, contracts the Tenno to defeat Ambulas units on the field (having anonymously invested in the Ambulas project to know of its whereabouts) and collect the Animo Nav Beacons that drop on the proxy's defeat, both to stifle Animo's learning and to figure out Animo's location. Eventually, when enough Animo Nav Beacons are collected, Ergo Glast concludes that Animo is located on Frohd Bek's capital ship, currently in orbit over the Ambulas manufacturing site on Pluto.

As the Tenno battle Ambulas proxies and the Corpus units sent to reinforce them, Frohd Bek reveals Ergo Glast's past apprenticeship to him, and further taunts Glast over his stubborn dedication to his anti-Corpus ideals and the corruption of Animo's intended purpose. Under Glast's orders, the Tenno hack into incoming Ambulas proxies and trick Bek's forces into delivering the compromised proxies to Bek's ship. Once enough proxies are on board, Glast uses them as Trojan horses to activate Animo's self-destruct sequence, destroying Bek's capital ship in the process. As the ship explodes, Frohd Bek orders his ship's bridge module to be ejected, leaving his ultimate fate a mystery. 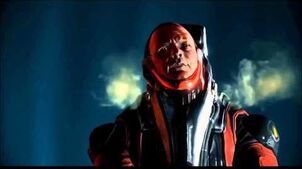