Free Space is a tileset exclusive to Archwing and Empyrean missions, set in outer space within orbit above a planet. This vast zero-gravity environment is ideal for high-speed maneuvers and long-range combat, with broken rocks, debris, and asteroid mining outposts offering occasional cover.

This tileset is the first to offer an open-edged map with no solid borders. Nonetheless, straying too far outside the map's invisible boundaries will make the Lotus or Ordis warn players about leaving the mission; if players remain outside the boundary for several seconds the Landing Craft will forcibly extract the player, failing the mission.

Some larger rocks in this tileset can be destroyed, making them shatter into smaller though intangible pieces. This destruction is mainly useful in denying an enemy cover to escape behind.

Smaller destructible rocks can drop resources, for example small amounts of credits. Using melee is recommended because it makes collecting easier as drops can easily be overlooked due to distance and visually chaotic background.

The asteroid mining bases in this tileset are worked on by mining lasers drilling into the rocks. Damaging these mining lasers causes them to point erratically in random directions, occasionally shooting their beams out into space. These lasers deal

Radiation damage and proc upon hitting unwary players, but are easily destroyed with a few hits. They are also found on Grineer Shipyard tilesets. 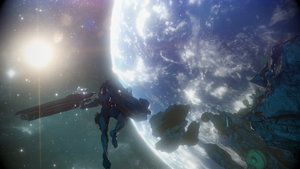 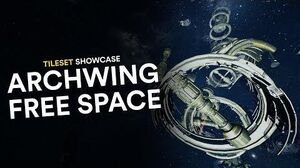