The Foundry is the section of the player's Orbiter responsible for the crafting of Warframes, Archwings, Sentinels, weapons, and other equipment in Warframe. Accessing the Foundry requires completion of "Locate the Foundry Segment" tutorial mission from the Vor's Prize Quest, and then installing the Foundry Segment reward from said mission, which will permanently unlock the Foundry for use.

The Foundry can also be accessed via the Warframe Nexus app.

Forging an item involves acquiring the blueprint for that item, gathering the necessary components specified by that blueprint, initializing the build process, and waiting for the item to complete in real-time. The foundry will continue to build the item even when the player is logged out, allowing for items with long build times like Warframes to be available in a set number of days regardless of in-game playtime. The build process for any item except for Clan Key may be canceled any time before completion, refunding the resources and blueprint with the exception of Argon Crystals. Completed items can then be claimed, putting them in the player's inventory for use.

The Foundry can have an unlimited number of builds progressing at once, the only restriction being that it cannot have two builds of the exact same item going simultaneously.

When crafting an item in the Foundry, a solid mass of energy in the shape of said item will be shown floating within it. The mass will properly acquire the item's color and textures once crafting is complete. When forging complete Warframes or Warframe alternate helmets, the mass will be in the shape of the Warframe's head. If multiple items are being crafted, the first item to start construction will be the one shown in the Foundry.

While many blueprints for many different items can be purchased from the Market module in the Orbiter or from Research rooms in a Dojo, some blueprints are only available as rewards from bosses, Nightwave Offerings, or Orokin Void and Orokin Derelict missions. Blueprints require materials, either in resources or intermediate parts, and some

Credits in order to realize the final item. Certain weapons may even require another weapon or two to construct, usually in regards to dual-wielded secondary weapons. A list of those weapons is here. The player's current collection of materials can be seen under the Components button.

Items are commonly built from intermediate parts, items that are the result of other blueprints. There are just a small number of complex weapons that are built from simpler ones, but the majority of Warframes require players to buy a Warframe blueprint and gather three intermediate part blueprints to craft the components (Neuroptics, chassis, and systems) of the Warframe itself. These component blueprints are typically dropped from bosses, with most frames having a specific boss associated with them. Exceptions to this include

Chroma, whose parts come from a quest; and

Vauban, whose parts are awarded as Nightwave Offerings.

Most blueprints may only be used to craft an item once, whereupon it is consumed. Others, meanwhile, will have no limit as to how many times they may be used. Those that have no crafting limit will have a gold-tinted background and "REUSABLE BLUEPRINT" at the bottom. Single-use blueprints will display the number of blueprints left. If a blueprint produces multiple items, then the number of items will be specified in the name.

For most items, claiming a fully-built item is as simple as selecting it and pressing the related button. In the case of Warframes and weapons, there must be available inventory slots. If a vacant slot of the corresponding type is not available, the Warframe or weapon will remain in the Foundry until an available slot can be acquired. Warframe slots cost 20 Platinum

20 each, while weapon slots are purchased in pairs at 12 Platinum

Foundry construction can be rushed by paying

Platinum to instantly finish the item, with different items requiring different amounts of payment for rushing. This amount is fixed until it reaches 50%, from there on it decreases down to 50% of its initial costs.

30 will decrease to 24 Platinum

24 once the item reaches 70% craft completion.

The Foundry is also the place where players can manage their Arcane Enhancements under the Arcanes button to the bottom right of the screen. This section allows players to view any Arcanes acquired, as well as the ability to upgrade them to improve their effectiveness.

The Foundry can be upgraded with various Orbiter Segments that add the ability to construct specialized items in it:

Both segments can each be acquired as blueprints from the Tenno Research Lab in a Clan Dojo for 15,000 Credits 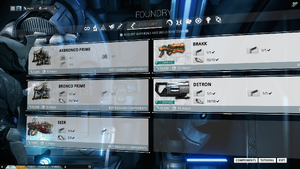 If you’ve engaged in the Adversary hunts with Kuva Liches and Sisters of Parvos, your Foundry might be suffering from some unavoidable clutter. The amount of Hounds and weapons sitting in your Foundry have grown to not only take up room in your list but also within the database itself!

To alleviate this clutter, you can now Sell a Hound and/or Adversary weapon directly from your Foundry without having to claim the item and use a Slot, granting yourself some Credits! Get cleaning up your (H)Foundry. Ordis’ orders!