Flawed Mods (previously called Damaged Mods) are weaker versions of preexisting Mods intended for newer players, obtainable primarily during the Vor's Prize quest. They are identified by visible cracks on the mods' image as well as the word "FLAWED" in their descriptions.

Flawed Mods only drop during the Vor's Prize Quest in lieu of their normal counterparts, and nine of these Flawed mods are rewarded as the player progresses through the quest. Flawed Mods will only drop during the questline missions, with the exception of the Mercury Junction which rewards flawed copies of Fast Deflection and Streamline. From Hotfix 18.6.2 (2016-03-22) onwards, these mods cannot be traded.

Flawed Mods still provide the same effects as their normal counterparts. However, as their name suggests, these mods have reduced power and/or rank. Flawed Mods come in three types:

As a rule, most mods have only one flawed counterpart, selected from the pool of flawed variants above. For example, the mod

Serration has a flawed mod with reduced drain, effect, and maximum rank, and no other flawed variants.

There is no way to "unflaw" a flawed mod.

These mods effectively give new players a hand when starting out, as normal mods may be too costly to rank up (both in terms of Credits and Endo), or too capacity hungry, especially without any Orokin Reactors or Orokin Catalysts to increase mod capacity on new players' equipment. Once players start gathering enough supplies and mods, they are free to convert these mods to Credits/Endo to strengthen their normal counterparts or keep them, with the first type still being useful for some loadouts due to a reduced capacity drain, thus being able to fit where a non-flawed mod would not fit. 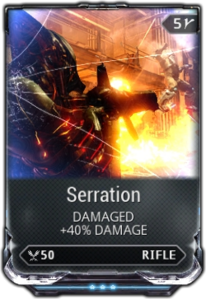 Old image of a Flawed