Teleport Augment: Teleport will perform a Finisher on the target, dealing 200% Extra Damage. 50% of Energy cost is refunded on a kill.

Fatal Teleport is a Warframe Augment Mod for

Teleport to immediately perform a melee finisher upon teleporting to the target, with an additional damage multiplier. Additionally, if the finisher kills its target, 50% of Teleport's energy cost is refunded. 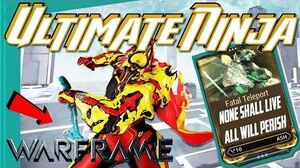