Extractors are drones that collect Resources from a planet's surface, which allows for the automatic gathering of resources without the need for player control.

The most basic type of all Extractors. It requires 4 hours to collect Resources.

Titan Extractor blueprints can be purchased in the Market for 50,000

This extractor has twice the capacity of the common extractor.

It was first available to the Blaze and Inferno levels of Ember Prime Access. This extractor returned temporarily at December 8, 2015 through January 5, 2016 as part of the purchase-able Prime Vault, along with

Reaper Prime, as well as Misa Prime Syandana, and

Frost Prime avatars. It can only be obtained by buying the Prime Vault pack, however.

The Distilling Extractor has a greater chance of collecting Uncommon and Rare resources.


This type of extractor follows exactly the same mechanics as the Titan version. However, it has double the health and takes 8 hours to collect resources instead of 4 hours. It requires a fair amount of Oxium and far more Credits to build.

Distilling Extractor blueprints can be purchased in the Market for 50,000

Compared to the Distilling Extractor, it has an increased chance to collect Uncommon resources.

Originally, it was only available to the Stomp level of Rhino Prime Access and its associated Prime Accessories pack but has been included in the Brains and Brawn Prime Vault pack, the Brute Prime pack, the

How to use[edit | edit source]

The amount of resource drones you are able to send out depends on your Mastery Rank.

Furthermore it is possible to send out more drones, if either:

Because of that, the maximum amount of drones in use is 5:

- Prime Access: It does not matter which of the possible selections of the offer you choose. Even if you only opt for the exclusive "Prime Accessories" additional package. All options of the offer allow the usage of an additional drone, but only once. This means buying more packages than one will not let you use even more drones.

- Founder: The founder packages are not available anymore and are also not acquirable otherwise.

Hence, the usage of the additional fifth drone is – so far – reserved for those buyers at that time.

Each Extractor type has a different resource rarity rate which depends on the type of the Extractor.

See here for a list of resources by rarity. 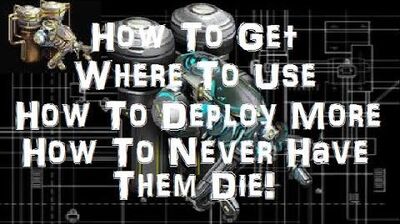 Hotfix: Specters of the Rail 6

Retrieved from "https://warframe.fandom.com/wiki/Extractor?oldid=2188043"
Community content is available under CC-BY-SA unless otherwise noted.