https://www.warframe.com/droptables
CODEX
Exploiter harvests energy from the landscape and uses storms of ice and snow to safeguard the Temple of Profit from trespassers.
"Solaris. United. You shall not be spared the rod... as those who came before you. Were. Not. Spared."
—Exploiter's introduction

Exploiter Orb is a large Raknoid creature that can be found patrolling around the Temple of Profit within the Orb Vallis, acting as one of the Grand Bosses of the landscape. She is the one responsible for the destruction of Deck 12 which left many of its Solaris United survivors traumatized. The Exploiter Orb is battled in the ruins of Deck 12 located in a cave northeast of Harindi Crater, requiring a single Diluted Thermia from the recurring Thermia Fractures event.

Unlike the Profit-Taker Orb, the Exploiter Orb lacks Sentient adaptive shielding, but her carapace remains impervious to all gunfire. To defend herself, the Exploiter Orb can surround herself with a winter storm on command and has four vents across her lower body which spray jets of ice and an underbelly turret. Her main weakness of overheating is kept in check by her numerous exhaust vents as well as the small squad of Coolant Raknoids accompanying her.

Around the Temple of Profit[]

The Exploiter Orb has a set path that she will follow, taking it in a loose circle around the Temple of Profit. She will climb over terrain, mountains, and across roads. She constantly makes noises akin to roaring, indicating her aggressive state. Her steps will do contact damage if a Tenno is too close to her feet. It takes her around 15 minutes to return to her starting position.

Upon a player getting the Orb's attention, she will begin spewing icy vapor from the jets mounted on her underside, creating a snow vortex around the Orb. This also signifies that the Orb will begin to actively attack the player with her many other attacks. The snow vortex has many interesting properties, though:

The Orb has many other attacks, such as:

When the Tenno first enters Deck 12, located in a cave northeast of Harindi Crater and inserts Diluted Thermia into the Thermic Condenser located next to where the Ventkids vent would be, Exploiter Orb will engage the Tenno with the following moveset.

After pursuing the Exploiter Orb outside the Deck 12, the Orb Mother will have an entirely different moveset.

In the ruins of Deck 12, located in a cave northeast of Harindi Crater, Rude Zuud exclaims she and her sisters built a device to condense the planet's thermia into a weapon strong enough to be used against the Exploiter Orb's defenses. One player must deliver their Diluted Thermia into the Thermia Condenser on an upper platform, which is collected from the Thermia Fractures world state event that occurs once every few weeks; only the player that interacted with the Condenser will have their Diluted Thermia consumed. The Exploiter Orb will then climb down the ruins and engage the Tenno, proclaiming herself as the one responsible for the destruction of Deck 12.

The Exploiter Orb engages the Tenno nested high up, and will constantly shoot her turret belly throughout the phase. Shoot down the rocks that maintain her footing to bring her down. Once she falls down, the four vents on her sides will be exposed to fire. Shoot down one of the vents.

Once one of the vents is destroyed, the Mother Orb will ice up the rest of her vents rendering them invulnerable. She will then travel to the other side of the room while surrounding herself in a winter storm. Once there, she will constantly shift her body around, summon swarms of Mite Raknoids, and occasionally slam her body to the ground causing an avalanche of ice which can proc

At this point, six Thermia Condensers will begin to continually dispense a Condensed Thermia Canister, which can be found at the following locations:

The Condensed Thermia Canister can be used to melt the ice which protects her vents from damage. To use it, the player must lob the canister with Alternate Fire (default MMB ) and shoot the canister to make it blow up. The following are the different effects which the proximity of the explosion will melt the ice:

Once fully exposed, up to two more of her vents can be destroyed before she ices up her final vent if it was partially melted before. She will proceed to the middle of the room and hang overhead, dropping several Coolant Raknoids which must be defeated. It is possible to throw a canister at the iced up vent while Exploiter Orb hangs overhead.

After defeating enough Coolant Raknoids, the Exploiter Orb will once again descend to the Deck. Melt the last vent and destroy it and she will retreat and head topside. Head out of the cave to proceed to the next phase of the fight.

The Exploiter Orb can be found waiting for the Tenno outside the cave. In this phase, a Heat Gauge will be displayed at the top-left of the player's HUD, which indicates the overheat level the Mother Orb is currently at. Throughout the fight, Exploiter Orb will alternate between using her hull flamethrower, firing mortar cannon and calling Coolant Raknoids as reinforcements. The main objective of the phase is to overheat the massive Orb until her heat gauge is full, rendering her vulnerable to assault.

Exploiter Orb herself will heat up passively, though swarms of Coolant Raknoids will rush in from all directions, each of which can cool her down by 5% of her heat gauge once they reach her underbelly, after which the Raknoids will slowly "bleed" to death. If the Raknoids are defeated before they reach Exploiter Orb, they may drop a Coolant Canister which will be used in the later parts of the fight.

When Exploiter's heat gauge reaches roughly 45%, she will slam her main body to the landscape's frigid surface to cool herself down to 15% before commencing heat generation, causing roughly a dozen Thermia Fractures to appear. There is a set cooldown of 30-45 seconds before she repeats this move if her heat gauge surpasses 45% again. These Fractures can be used to instantly create a Condensed Thermia Canister by spending a Coolant Canister into it, then lobbed to the Orb Mother to permanently speed up her overheating rate. The overheating speed added to the heat gauge is doubled if the canister is shot mid-air, near the Orb Mother.

When Exploiter's Heat Gauge reaches roughly 65% or more, she will vent out flames around her creating a damaging physical dome which traps any Tenno inside for roughly 10 seconds, which will take away roughly 25% of her heat gauge before preceding heat generation. The dome has its top open, meaning that players can still enter it or exit it.

Once she fully overheats, she will become disabled allowing the Tenno to approach her. This will trigger a cutscene where the Tenno boards her side and rips off a part of her hull, leaving a weak spot for the Tenno squad to assault. Once she loses a third of her health, she regains her invulnerability and the overheating process must be repeated twice more, resetting her overheating speed.

After she is fully defeated, she will drop a sizable amount of loot consisting of a

Hildryn part blueprint, as well as massive amount of Orb Vallis resources both common and rare. Loot and escape as soon as possible as she will self-destruct (notably much faster than Profit-Taker Orb), obliterating all Tenno in a 300 meter radius. 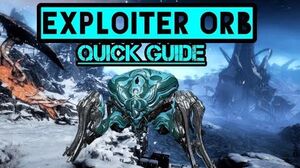 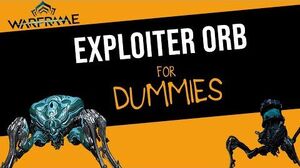 Warframe Everything you need to Kill the Exploiter Orb Solo!

The team continues to work on further crash fixes and Matchmaking issues related to join-in-progress and Operator specific cases. The particular case of missing Exploiter Orb during Phase 2 is also still under investigation. If anyone encounters this particular issue, we would greatly appreciate Host EE.Logs to http://support.warframe.com/. Visiting http://warframe.com/logs shows you how to collect your EE.Logs!