Shadow, Swordsman
CODEX
From the shadow of the long night emerges a new Excalibur.

Excalibur Prime, which was only available in the Global build. It was released along with

Excalibur Umbra in Update 23.0. Unlike Umbra Prime, it has Radial Howl, more armor, and Sentience but lacks the Death Orb energy passive that all Prime frames have.

Excalibur Umbra Prime was originally purchasable by players of WARFRAME (China), with or without

Nikana Prime, as part of the China Founders pack. This offer is no longer available.

The China Founders' program was closed alongside the release of The Sacrifice in WARFRAME (China) on April 11th, 2019. China Founders were compensated with an Umbra-exclusive Excalibur Umbra Beast Helmet, corresponding light and dark Glyphs of the helmet, a Legendary Core, and an Excalibur Umbra Noggle. 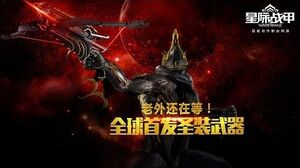