“Market forces dictate that you need to evolve or die.”
This item is no longer available for purchase.

https://www.warframe.com/droptables
CODEX
The Sentients had won. They had turned our weapons, our technology, against us. The more advanced we became, the greater our losses. The war was over unless we found a new way. In our desperation we turned to the Void. The blinding night, the hellspace where our science and reason failed.

We took the twisted few that had returned from that place. We built a frame around them, a conduit of their affliction. Gave them the weapons of the old ways. Gun and blade. A new warrior, a new code was born. These rejects, these Tenno, became our saviors. Warrior-Gods cast in steel and fury striking our enemies in a way they could never comprehend. Excalibur was the first.

- Orokin 'Warframe' Archives
Excalibur Prime is the epitome of mobility and offense, and features the same abilities as Excalibur, but has unique mod polarities installed allowing for greater customization.
—In-game Description

Excalibur Prime is the Primed variant of

Excalibur, possessing higher armor and energy, as well as an additional

Aura polarity. Excalibur Prime is a Founders-exclusive Warframe released alongside

Excalibur Prime was only obtainable by upgrading a Warframe account to Founders status of Hunter or greater, which is no longer available. He came with his own Warframe slot and was already augmented with an Orokin Reactor.

The Founders' program closed on the 1st of November, 2013, as announced on the warframe forums. This closure is inclusive of pack upgrades. 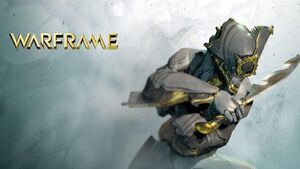 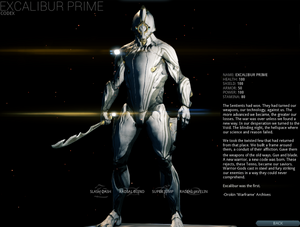 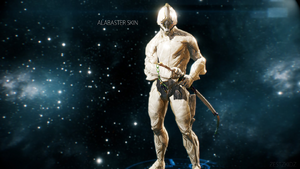 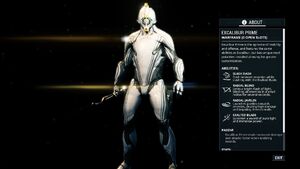 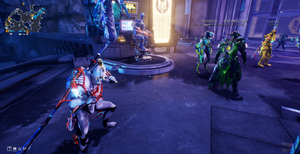