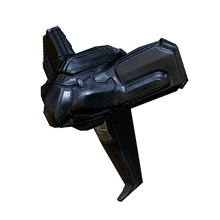 The Exard Scaffold is a scaffold used in Amp construction, that allows the weapon to perform an alternate secondary fire function (default Mouse3 ). The Exard fires a rapid-fire barrage of explosive projectiles that detonate on contact with enemies or the environment. When fired, the Exard will continue firing until the Amp's energy is spent.

‍3,000 standing and requires a rank of Agent to purchase. It is also a possible rank-up reward for advancing to ​Agent​ with Vox Solaris.

Retrieved from "https://warframe.fandom.com/wiki/Exard_Scaffold?oldid=2067458"
Community content is available under CC-BY-SA unless otherwise noted.