Region Resource 7.00%
Eviscerators are Grineer units that were released with the Fomorian Event. They feature higher armor and health than the regular Grineer Lancer. The Grineer Eviscerator is equipped with the

Miter that fires large saw blade projectiles, acting much like the

Glaive when thrown. The saw blades bounce off surfaces and can be deflected by melee swings, being destroyed after bouncing a certain amount of times.

The Eviscerator's model is a variant of the light Grineer units such as Butchers, Powerfist, and Flameblade with an alternate helmet similar to that of the Elite Lancers. It has goggles seeming to resemble Seekers.

They can be found in the Grineer Settlement as part of the Grineer infantry, in missions on Mars from the Gradivus Dilemma event, on Earth in The Cicero Crisis node and during Invasions. They are also commonly found on Ceres on the Grineer Shipyard tile set.

In the Grineer Settlement, they are equipped with desert camo and a face mask design similar to the Hellion's. Similarly, Frontier variants sport forest camouflage, with standard Grineer facemasks instead of goggles. In Grineer Galleon or Grineer Asteroid tilesets, the Eviscerators are equipped with similar armor of the Butchers while retaining the face masks.

The faces of the survivors, all lined up for evacuation, were etched with confusion when the lift doors closed in front of them.

We descended to the hum of the lift flying through the tower. I turned and smiled at Avantus, “I was beginning to believe you were going to bring them all with us.”

“Nonsense, Bilsa, that’s simply not feasible.” Avantus replied. “You know we need to find safety and re-establish the Congress of Executors, we have no time for a rescue mission. Besides, those people know their place and they just did their duty. I will see to it they are honored when our Orokin Empire returns to glory.”

We were safe for the moment. When the Infestation took over the entire tower went into lockdown. Avantus’s Executor status meant that she, and by extension I, were among the few people who could move freely about the massive vessel.

When the lift slowed and I overrode the controls to keep the doors closed. We listened for what seemed like forever, “Do you hear anything?” I said.

“No, I don’t smell anything either, let’s go,” said Avantus raising her pistol. The doors opened to a darkened room. The light of the lift illuminated scattering figures but this wasn’t the Infested, we were still alive.

“You there. Step forth.” Avantus commanded and out of the shadows came several burly figures.

“Grineer soldiers!” I said with an almost childlike excitement as others joined them.

“Grineer workers, useless to us,” said Avantus. Despite everything, she still looked glorious in her full regalia and golden syandana.

“Have you not been taught protocol?” I shouted, “an Executor stands before you.” The workers look at each other puzzled, then the biggest one kneeled and bowed before us. One by one the other Grineer followed.

Avantus shook her head in disbelief and went to the nearby console to turn on the lights. We were in the mechanical workshop. Tools in cases line the walls and supply crates edged the room.

“That precept said the hangar is through the next hall,” Avantus stepped around the still kneeling grineer and toward the rear doors.

“No, stop!” protested the big Grineer, “Danger.” We kept walking but sure enough when we got close the doors shook and moaned with the scraping of claws.

“Those imbeciles,” Avantus cursed. “They said this sector wasn’t compromised.”

“It doesn’t sound like that many. Can we fight through?” I asked.

“What? Just the two of us, with pistols and no Corrupted?” she snapped.

“What about…” I motioned to the Grineer workers.

“With no weapons? There’s not enough of them to be decoys.” she said.

Avantus noticed this and waved her hands over the nearby console to unlock the case.

The rest of the workers rushed over and grabbed the bigger grinder saws and plasma cutters. They put on safety equipment as if it were body armor.

“Always wanting to cut something I see,” said Avantus to the worker.

The big one nodded and smiled. Did he have any idea what those things might do to him?

They lined up shoulder to shoulder against the door, while we stood a few paces behind with a couple more at our side. The Infested thumped and howled, they could sense us. Their stench penetrated the doors and attacked our nostrils.

Avantus looked over at me, “Bilsa, it goes without saying, we won’t be sharing that ship with the likes of these.”

I gave her a sideways look, why would she say that in front of them?

“Oh child, they do not have the comprehension.” She laughed. “They are content to do the job they were bred to do, only now they get to cut infested flesh instead of scrap metal.” I looked at the Grineer, they did seem unfazed.

“Grineer… work!” commanded Avantus and the Grineer revved up their saws. I opened the hall doors and a wave of Infested crashed and collapsed against a solid wall of blades. Viscera pooled at our feet. A monster would tear one down only to have another Grineer take its place. “Move!” she yelled and the Grineer wall marched forward, a line of death that eviscerated anything in its path.

We reached the hangar doors at the end of the hall and prepared for the worst, on the other side could be hundreds. Avantus gave the Grineer a moment to shake the guts out of their tools and catch their breath, then she nodded for me to release the locks. We all braced ourselves as the doors opened to… nothing, no Infested, just a lone ship on the other side of a massive hanger. Relieved, we sprinted across the open expanse.

As we approached the ship Avantus said, “Bilsa, you open the shuttle,” and then added quietly, “I’ll make sure we don’t have any guests for our trip.” I went to work at the nearest console and the Grineer encircled me to fend of any possible threats. Avantus stood at the ship’s entrance with a few more of the grunts guarding her.

“More coming.” She pointed at a swarm of Infested charging from where we came. “Grineer, attack them. GO!” she bellowed.

The Grineer stiffened, their blades roared but stayed their ground.

Incensed, she cried louder, “I said go, NOW!” but the Grineer did not move from the shuttle door.

“It’s open.” I shouted, turning just in time to see the biggest Grineer drive his saw right through Avantus’s spine. The high pitched whir of metal on bone masked her screams and she collapsed to the floor. Her pearl white robes were now dyed crimson. Her dead eyes looked through me.

I started to run but was struck in the face and knocked to my knees.

The big Grineer loomed over me. “Now you work for us. Make the shuttle go.” 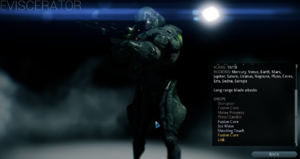 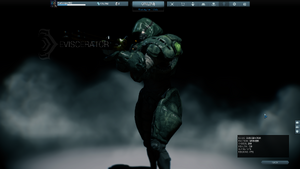 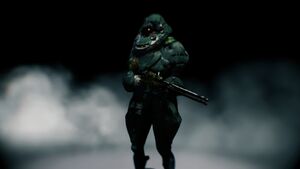 An Eviscerator unit as seen in the Codex. 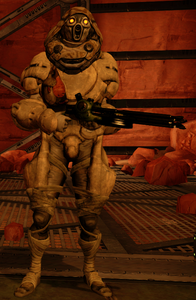 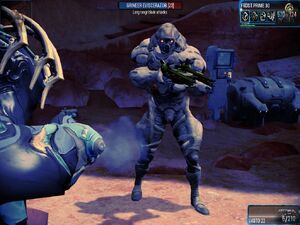 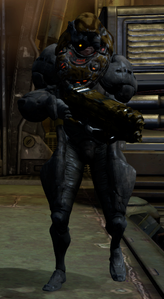 An Eviscerator before U 9.5. Note how his weapon resembles an Ogris. 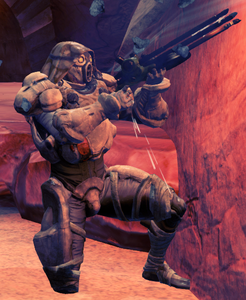 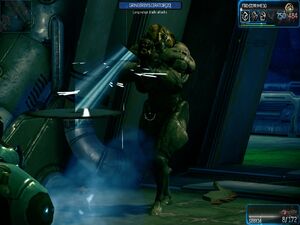 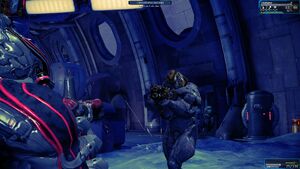 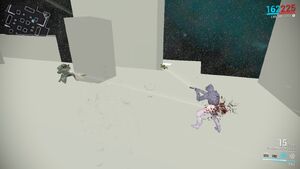 Eviscerator shooting at Decoy with its projectiles shown 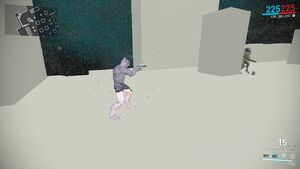