Escape Velocity is a

Worm Hole that grants Nova and her allies increased movement speed after teleporting. 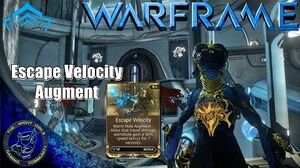