WARFRAME Wiki
Register
Don't have an account?
Sign In
Advertisement
in: Enemies, Enemies With No Drops, Update 28, Corpus
English

Spectral Debris 5%
CODEX
The ghostly minions of Parvos Granum within his timeless prison-realm.

Errant Specter is an enemy first introduced in Update 28.0 (2020-06-11). Specters mimicking the appearance of Treasurers, they constantly multiply in the Granum Void.

Errant Specter as seen on the Codex 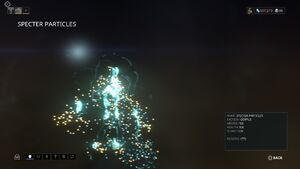 Errant Specter´s Particles, as seen on the Codex