Environmental Hazards are random chance environmental modifiers or encounters, which can increase the difficulty of the mission. 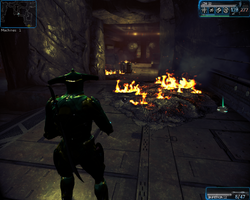 In this hazard, patches of flaming materials are scattered across the map. Standing on the fire for longer than one second will damage the player and any enemies that walk through it; as this is

Flame Repellent will reduce the amount of damage taken. It is possible to extinguish the flames with

Cold damage. As an additional complication, enemies will be alert from the very start of the mission (even if the Tenno have not been spotted yet) and the alarm cannot be shut off until enemies have been allowed to initiate a lockdown.

Some lootable corpses will also be scattered around the map at standard container spawn points. 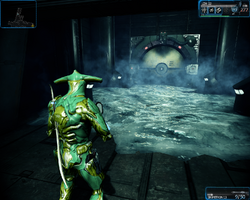 In this hazard, the maximum amount of shields will be lowered by 50% (Including those given by an allied Shield Osprey or Orokin Drone), rounded down, for the duration of the mission, shield recharge is unchanged. The amount of shields lost to this effect can be reduced with the

Warm Coat mod. Note that enemies suffer reduction of shields, though the amount decreases with level.

Thick patches of ice can be found scattered around, both on the ground and clinging to the surroundings. These ice patches have their own material and collision meshes; Tenno can slide further on ice than metal or rock, as one would expect, though the ice itself is not perfectly smooth and may interfere with said maneuvers. Contact with the ice will inflict a 2 second Cold​ proc, refreshing its duration if the Tenno remains on it.

When this hazard occurs, the Lotus will comment about cryogenic malfunctions or atmospheric issues.

This hazard is also replicated when destroying the Frozen Infested Hive (without the additional ice effects) or during Reactor Sabotage (without shield reductions) once Coolant has been placed in the fuel port.

Though originally a potential complication for any mission, this hazard is now exclusive to Nightmare Mode, Hive Sabotage, Sorties, and Reactor Sabotage. As the name implies, gravity is significantly reduced, resulting in greater jump distances and similar effects.

This hazard is also replicated when destroying the Stabilizing Infested Hive.

This hazard is guaranteed during Reactor Sabotage when a fuel cell is placed in the coolant port in the Grineer Galleon tileset, or if the fuel cell has been reinserted in the fuel port in the Corpus Ship one.

The latest hazard to be added, it causes the Tile Set visibility to lower significantly, making orientation and movements harder. It only happens during a Corpus Ship Reactor Sabotage if the fuel cell is inserted in the coolant port.

Rarely during a mission members of the opposite faction will invade, starting small AI fights as the mission slowly transitions from one faction enemy to the other. This can take place on any map however will not happen on Assassination, Defense, Mobile Defense or Disruption missions. These events commonly feature fire hazards appearing later in the mission as the faction transition occurs. This hazard is more likely to occur in the Orokin Derelicts and Mars.

The Lotus will typically warn the player of the approach of opposing forces through one of the standard Exterminate warnings.

This is not to be confused with the Invasion mission type. With the addition of Invasions, this mission event has become much rarer.

Found throughout the Infested Corpus Ship. these breached segments open directly to space, resulting in steady shield/health loss. Simply moving into an adjacent area through a nearby door is sufficient to nullify the effects of vacuum, and Tenno are free to do so at any time.

On the Grineer Shipyard tileset there is a chance for enemies and Tenno to be struck by lightning when standing in large outdoor areas. The damage done by the lightning is moderately high and can even kill weakened Tenno.

Archwing missions are not without their own set of environmental hazards. These are, for the most part, currently limited to the Corpus Ship Archwing tileset. 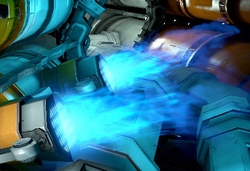 These blue-flame energy vents can be found scattered throughout Corpus Archwing Sabotage and Exterminate missions; they are active for only a few seconds at a time, but whilst active, the 'flame' will deal high amounts of

Electricity damage to anything in contact with it (upwards of 100 damage per second), and can cause the associated proc effect.

The vents can easily destroy enemies and inflict considerable damage to players, so care should be taken around them. The vent will light up briefly before it becomes active, giving players time to get out of the way.

These stationary energy barriers pose little actual threat as they are always active and hard to miss, but causing contact with them will inflict a moderate amount of damage. Extended contact can quickly deplete shields, so caution should still be exercised when fighting near the barriers. They will not damage health.

Unique to the Operation: Arid Fear, these periodic Void Storms would occur every 33 seconds. The screen briefly turned purple with an effect in the center of the screen, and all Tenno regain 25 energy - up to their warframe's maximum reserve. Aside from any mild disorientation that might arise, the Void Storms seem to have no other effects on Tenno or Corpus units.