Enemy Behavior describes various actions or tactics enemies employ while spawned in the game. While based mostly on when enemies are alerted to the player's presence, this can include behavioral traits observed while the enemy is unaware of the player as well.

When enemies attempt to engage the player, they will attempt to avoid obstacles (including other enemies) in order to reach them. When hidden by various means such as by the use of Shade,

Smoke Screen, enemies will only know the players' location by the sound of their weapons. If they are silenced or by using

Hushed Invisibility, the enemies may attempt to find cover or run toward the player but still will not know exactly where they are.

Undertow suffer from the inability of enemies to continue to fall into his pool, since enemies that have sunken into the pool at the edge are objects that other enemies can detect, thus will stand directly at the edge of the pool, unable to go in until the enemies at the edge are dead. This kind of pathing issues can be exploited in some ways, however, such as standing on some kinds of boxes or objects in small rooms with doors on either side, as enemies will stop at a certain point and wait until the player comes down, often grouping up in massive numbers in some cases, allowing AoE weapons to make quick work of them. This can also decrease the number of enemies spawned in Survival missions, as enemies who were targeting this unreachable player will stop wherever they are on the map unless another player is in view.

It can be noted that enemies may become bugged, not moving on upper or lower levels of the mission just aiming their weapon around, or pacing around. It is unknown what causes this issue but it will cause enemy spawn rates in the immediate area to drop significantly in Survival missions, halting progress a bit.

WARFRAME utilizes a navigation mesh (NavMesh) on Tile Sets to aid NPC pathfinding through a level. In gameplay environments where 3D movement is more prevalent (such as Archwing missions), the game uses a Sparse Voxel Octree (SVO) to map traversable terrain in a level. Pathfinding algorithms include greedy A*.[1] For obstacle avoidance in 3D movement, the game uses an optimal reciprocal collision avoidance (ORCA) algorithm.[1]

When an enemy is unalerted, they will walk around, chatter, or stay stationary while looking around casually. On the mini-map, unalerted enemies will have a red, hollow arrow when detected on your radar. While their paths can be noted and remembered, enemies do not execute the same pathing routine every time and may switch it up on occasion. It can be noted that while enemies are unalerted, problems with pathing become apparent, such as groups of Grineer attempting to go into opposing rooms but neither side will move out of the way to allow this, causing them to get stuck in doorways you may need to cross without alerting them, which becomes almost impossible. Enemies may also spawn in large groups, making stealth kills more tricky to execute without alerting the others.

In the case of Grineer enemies with helmets, their helmets will sometimes oddly move independently of the facial mesh underneath when unalerted, with the mask "looking" in a certain direction while the Grineer walks forward and keeps their head centered. This does not affect where they are looking, and they will still have their vision pointed forward.

A Stealth Kill occurs when you kill an enemy who is not aware of any of its enemies, including wild creatures. Killing an enemy will produce Sound that is loud enough to travel about 5 meters, and enemies within that range will become cautious and become alerted for around 20 seconds. Killing those enemies while alerted will break the stealth kill bonus, but after this point, they can be stealth killed and they will count towards stealth kills. If invisible, you can tell when this is available on human targets if you are given the opportunity to stealth kill them while close to them.

Note that this makes it extremely hard to do stealth kills on tight groups with melee weapons, and impossible to execute with frames that are not under

Smoke Screen, as enemies will immediately turn around to see you attacking the enemy.

Newly spawned enemies or enemies that the game teleports in front of the player have a timer before stealth kills are counted. This timer, which can be around 4-8 seconds or in rare cases indefinitely, killing this otherwise unalerted enemy will not count as a stealth kill, and thus will reset any stealth bonus multiplier you have if this enemy is killed. There is no way of knowing if an enemy just spawned in or teleported from another cell. This is why players may notice that despite all enemies being unaware of your presence, killing them all at once with an explosive weapon will often not give you any stealth affinity, or will break your current stealth multiplier.

There are two kinds of alerted state that enemies can be in.

Enemy Awareness: In Hotfix 19.6.3 (2017-01-17), enemy AI was changed for most enemies, that requires visual contact with the player for them to become fully alerted. Otherwise, enemies will remain in their cautious state and move to where they heard a gunshot and then search the immediate area. Before, if you were invisible with any ability or companion and then decloaked, enemies would know exactly where you were and would run to your location. Now, they must require direct visual contact or hear a sound you make with a weapon in order to know where you are. One enemy seeing the player is enough to make the others cautious, but they will not pursue the player unless the alarms have been activated as well.

Enemies who are alerted will have specific walk styles or behaviors, which helps the player know if the enemy is currently suspicious. Cautioned enemies (enemies who were alerted for some reason but do not know of the players' position) will walk with their guns aimed and walk with larger distances between steps. Corpus robots will lower their bodies slightly while their guns move back and forth, looking for players, and Corpus Ospreys will have their wings out and move around faster. Some enemies are more difficult to tell if they are unalerted, like Grineer Butchers, whose walk is more upright and aggressive when alerted but otherwise identical to their unalerted stance (at least when walking, when they stop moving they hold their weapon and swing it around). Some enemies are impossible to know if they are alerted or not, such as Grineer Rollers or Drahks, who have the same moving style regardless of their alert status, unless you look at their arrow status when detected on your mini-map radar.

To become unalerted from an alerted state, several conditions must be met:

Enemies that are currently taking advantage of some sort of cover act differently than normal units. Some units obtain the ability to burst fire their weapons, even Ballistas or Corrupted Crewmen. Enemies are also far more likely to throw grenades at the player while behind cover, besides when shielded by Shield Lancers.

Enemies in Exterminate missions, and especially the Grineer, will run to extraction if you leave them behind. After walking at least 70 meters away (depends on unknown factors) they will begin to run to extraction and ignore dead bodies on the way there. They are not considered to be alerted when in this state, but they will count as alerted if they see dead bodies. Once at extraction, they will cluster together and walk around aimlessly.

This was implemented to give players the illusion that the entire map is filled with enemies, and so enemies will always be at extraction if players rush through the level. Newly spawned enemies in other rooms when the player is near extraction will also run to extraction, allowing the player to essentially stay in one spot and let enemies come to them.

Interestingly, the game will almost always spawn two Eximus units near extraction on Grineer Exterminates but it is unknown why this occurs.

A general list of various things enemy units will do when under the effect of various crowd control effects, abilities, or status effects. 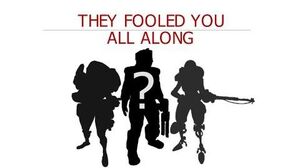 Number of enemies actually attacking you! 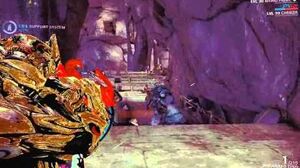 Sometimes the devious enemies of Warframe decide they’d rather stay safely behind cover and throw explosive surprises at the Tenno instead of rushing in. They do this when you are stationary for long periods of time. Some time ago we added an audio warning so that thrown grenades would chirp or tick, but experience has shown that they are still easy to miss during the chaos of fighting. A visible HUD marker and a warning glow have been added to grenades that are thrown at you to give you a better chance to react. PLUS, you can now shoot the grenade before it explodes, allowing for increased tactical revenge!

Why: More awareness on where Grenades are has been a longstanding community request to help the flow of battle. We are adding it to allow for more player tactical choice.