If you own a Railjack, consider visiting the practice node 'Free Flight' on Earth Proxima to practice Piloting and learning your Railjack's layout. If you do not yet own a Railjack, prepare to assist a squad and work together. We all lift together!

—Upon first interacting with the Railjack Navigation menu

Empyrean is a unique game mode introduced in Update 27.0 (2019-12-13). These missions take place in the vast expanse of space, utilizing Railjack and Archwings to combat enemy spacecraft.

To host a game in Empyrean, players must go to the navigation console on their Railjack, which can be accessed within their Clan Dojo's Dry Dock, in the middle of their Orbiter, or from the menu by pressing Esc  → Board Railjack. Players must complete the Rising Tide quest in order to pilot their own Railjack. However, any player who has completed The Archwing can join in Empyrean missions by selecting an Empyrean node in their Star Chart. The host's Railjack is used during the mission. Upon mission completion the host can use the Navigation screen to either begin a new mission or go back to the Dry Dock to collect all the mission rewards earned up until that point.

Empyrean missions involve the Tenno fighting either Grineer or Corpus in the various proxima regions within the Empyrean star chart. Players utilize their Railjack and Archwing to do a variety of tasks that vary based on faction type and region. Players encounter many different types of enemies including Fighters and Crewships, and players may also have side objectives, such as points of interest or abandoned derelicts, which can grant extra rewards if the mission is completed.

Enemy crewships can be boarded using the Archwing (including being launched from Archwing Slingshot facility within the Railjack). The crewships can be destroyed by either using Forward Artillery from within the Railjack, or by boarding and then destroying its reactor from within. They can alternatively be disabled and/or commandeered by boarding and killing its crew and pilot from within. If destroyed, any Tenno within will automatically be launched back into space on their Archwing. A commandeered crewship will become an active target for enemy gunships.

Both crewships and points of interest will occasionally launch Ramsleds which, if not shot down, will ram into the Railjack and deploy boarding parties of ground Grineer troops. These troops will not only threaten the Tenno aboard the Railjack but also periodically spawn hazards such as fires and hull breaches that if not repaired in time may cause the mission to fail.

Completing the mission will not offer an extraction point that players familiar with ground missions may expect. Instead, once Bonus Rewards above are shown on the screen - the mission is considered complete at that point, and any player in the squad can simply abort the mission (ESC  > Abort Mission), which will display a warning that only progress will be saved, but not any items or resources earned during the mission. However, contrary to the warning, all items and resources will also in fact be added to the player's account. Any one of the remaining players may select another Railjack mission from the Navigation console located in the Railjack's bridge, which includes docking the Railjack back in the hosting player's Dry Dock.

Empyrean gamemode and Railjacks use a slightly altered system of the currently existing damage system. Arch-guns and Arch-melees deal 90.91% (10/11) reduced damage to space enemies (or 9.09% of its arsenal damage) while Railjack Armaments and Tactical mods deal their full listed damage to them before accounting for hit point resistances and vulnerabilities.

Viral) do not have altered status effects and cannot proc against space enemies, but Arch-guns and Arch-melees modded for secondary elementals will still increase total damage.

This system does not apply to on-foot enemies, such as Ramsled boarding parties, and Crewship and Point of Interests personnel, who will take damage and status as per normal.

All Grineer missions are Skirmish missions; an Exterminate-like mission where players must kill enemy fighters and Gokstad Crewships.

At higher levels, Skirmishes will have outposts, called "points of interest", that often threaten the Railjack with armaments or buffing enemy fighters. The crew must send an "Away Team" to board the outpost, sometimes coordinating with the Railjack crew, to remove the outpost from play. Additionally, Grineer points of interest may reward components for

Missions involving the Corpus are a combination of Railjack gameplay and normal grounded missions in a Corpus Ship, which consists of Exterminate, Defense, Volatile, Orphix, Spy, or Survival.

After completing initial Railjack objectives, such as clearing points of interests or destroying a small number of enemy crewships, all players must dock within the Corpus Ship via Archwing. Once half the squad enters, a 30 second countdown will begin, after which all players will be forcibly teleported into the ship to transition into grounded objectives, which behaves identically to normal missions. During these Corpus Ship segments, the Railjack is invulnerable, but players cannot return to space gameplay or Omni teleport back to the Railjack until the grounded objectives are complete and have reached the extraction point from within the ship.

Some missions have optional secondary targets. They can be found in space stations near the main capital ship target. The entrance is revealed by a yellow waypoint, when you are in a range of 1500 meters. If entered, the player will get a mission to hack two terminals. To complete the hacking you will have to kill security drones, that slow down the hacking rate. Completing it will reward a hidden cache (rotation A), that is revealed and awarded at the completion of the main mission.

Most missions have an abandoned derelict-like structure floating adrift in space. Boarding these structures and then hacking a marked terminal will produce a "Cache" (rotation B) reward at the end of the mission. Intrinsics Piloting Rank 5 will reveal the derelict's location via a white waypoint.

Abandoned Derelicts can reward exclusive items, such as blueprints and/or parts for the

Void Storms are unique Void Fissure missions that feature randomly appearing hazards called Void Sinks that deal radial damage, but attacking them before they explode will cause them to disappear. Only foot enemies, including Crewship personnel and Ramsled boarders, can become Corrupted and drop Reactant.

Completing Void Storms, even without bringing in or opening a relic, reward Corrupted Holokeys,

As of Update 29.10 (2021-03-19), players gained access to six mission regions: Earth, Saturn, Venus, Neptune, Pluto and Veil Proxima. Earth and Venus proxima is unlocked by default. However, Saturn and Neptune Proxima require rank 3 Intrinsic, while Pluto and Veil proxima requires rank 5 and rank 7 Intrinsic in any category respectively to unlock. Each region has its own set of nodes that will be revealed as the player progresses through the region. These nodes progress in a linear fashion and access to regions is not controlled by Junctions.

Note that these nodes do not count towards the progress of unlocking Arbitrations and The Steel Path.

All drops within space and inside points of interest are distributed to the entire squad.

Upon completing all of the mission objectives, players will receive the mission rewards. They can then either search the area for additional resources or use the navigation console to begin a new mission or return to the Dry Dock.

As Railjack missions can have multiple separate objectives, the end-of-mission rewards also come in multiple parts. Completing the mission's main objective (or one rotation of it, in case of endless missions) grants a major reward (typically a Component Wreckage, Void Relic, or Endo). Reaching mission completion grants two resource bundles as well. Completing Priority Targets and Points of Interest also give rewards from their own separate reward "Cache" pools. Main objective rewards are node-specific, while other loot tables are identical in a given region (except for the Veil Proxima, where Grineer and Corpus nodes have different tables). 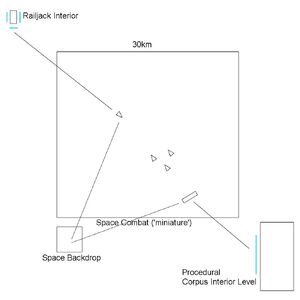 How Empyrean missions are rendered, according to [DE]Steve[1] 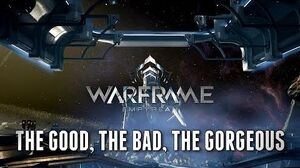 Warframe THE EMPYREAN EXPERIENCE! THE GOOD, THE BAD, THE GORGEOUS! 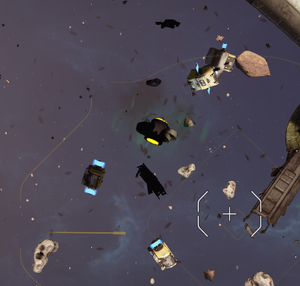 If the yellow explosive is shot, loot around itself will not be siphoned 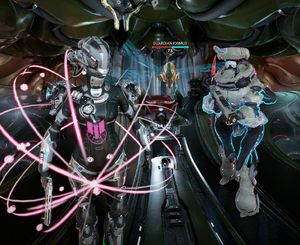 A Synoid Heliocor Specter bugged to have an infinite timer

Tenno are currently limited to holding 30 pieces of Railjack Wreckage. Wreckage limits as they currently stand can impact the flow of Railjack missions -- if you are one to play long sessions of Railjack missions in a row, you might have experienced this yourself - you cannot play missions until you manage your inventory. To prevent the interruption of having to scrap Wreckage every few missions, Wreckage is changing in a fundamental way:

This way you can continue to gather these resources in the background as you play, and choose how to use them once you’re back in your Dry Dock.

So let’s break this down a bit!

You and your Crew are ready to return to the Dry Dock after planet-hopping in your Railjack. Along the way you’ve collected a handful of Recovered Wreckage; Wreckage with no unique stats yet.

Back in the Dry Dock you notice a new icon/option in the Components/Armaments screen titled ‘SCRAP RECOVERED WRECKAGE’.

*Please note that logic for assigning unique stats remains unchanged - for example Mk I Armaments didn’t possess unique stats before this change, and they still won’t.

A storm's a brewin', Tenno. But where there’s risk, there’s Ghostly reward! Void Storms have been detected rolling through the Proxima. Supercharged with Void energy, boarding parties and Point of Interest enemies caught in these conditions are subject to Void Fissures - perfect for Void Relic opening! As the storm brews outside, brace yourself for Void Sinks on board your Railjack. These Void Sinks can deal damage to your Warframe if touched - shoot them to destroy!

Bring your Railjack Crew or your squad to open Relics, earn Intrinsics, and grofit with rewards! On top of your earned Relic reward, Void Storms offer their own goodies upon completion. May the Void be ever in your favor!

Void Storm missions can be selected in both the Railjack Star Chart and the Void Fissure tab of the World State Window.

Railjack Proximas and their corresponding Relics:

How do Void Storm rewards work?

All on-foot enemies are subject to becoming Corrupted from Void Fissures. Boarding parties, Point of Interest enemies, Crewship enemies, etc once Corrupted can all drop Reactant needed to open your Relic. Reactant is a shared pickup for Void Storms! Since Railjack requires Tenno to coordinate across multiple environments simultaneously, we felt that having shared Reactant pickups would help squads open Relics in a co-op friendly way.

Upon mission completion, you’ll be rewarded with your earned Relic reward, as well as an added item from the Void Storm drop table itself.