Gestures allow a Warframe to perform visible actions using their body for purposes of communication. They can be accessed and activated through the ingame Gear menu. Gestures are purely visual, and have no other effect in gameplay. 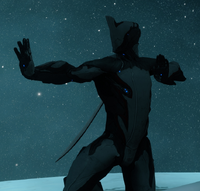 The following are the known list of actions that a Warframe can perform using the Gestures feature:

Retrieved from "https://warframe.fandom.com/wiki/Emotes?oldid=811975"
Community content is available under CC-BY-SA unless otherwise noted.