While blocking, redirect 50% of damage taken by allies within 12m to yourself.

Electromagnetic Shielding is an

Ack & Brunt-exclusive mod that transfers a percentage of damage and all Status Effects that nearby allies receive to yourself, but only when you are blocking. 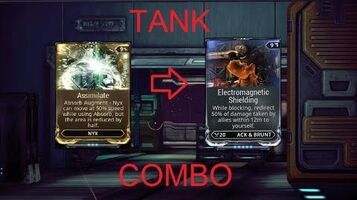