190
JavaScript not loaded. Please refresh your browser using Ctrl+F5 on PC or Shift+R on Mac.

Rising from the lakes at sundown and returning to them before dawn these simple-minded monstrosities roam the nighttime plains, howling, searching for a thing they can barely remember: completeness. Wholeness. An intelligence and malevolent purpose which, fate willing, they will never return to again.
—Teralyst Eidolon Fragment

The Eidolon Teralyst is a gigantic spectral Sentient Eidolon creature that can be found aimlessly roaming around the Plains of Eidolon at night, acting as one of the Grand Bosses of the landscape. This is the first of the 3-night bosses of Plains of Eidolon, followed by Eidolon Gantulyst and then Eidolon Hydrolyst.

The Eidolons are remnants of a massive Sentient that was defeated in a battle against the Tenno during the Old War, whose remains now wander the plains perpetually searching for their lost components. These fragments are, however, still formidable creatures armed with powerful attacks and near-impenetrable defenses, and are hostile to both Tenno and Grineer alike.

It is important to note players that have not unlocked Transference from The War Within won't have any means to properly fight the Eidolon Teralyst.

The Teralyst emerges from bodies of water on the Plains at the fall of night accompanied by a column of blue light marking their location. They generally walk in one direction, even if the Tenno are nearby, though their attention can be drawn to specific locations by using Eidolon Lures found throughout the Plains at night.

The Teralyst has many different attacks and several do very high damage, but they are all telegraphed. Once acquainted, it is possible to easily avoid the most damaging attacks.

If the Teralyst is still alive once sunrise hits, it will change course towards the nearest body of water. Upon arriving, it will become invulnerable and disappear in a pillar of blue light as it sinks back in, and all Eidolon Lures will self-destruct. The Teralyst can still be killed en route as long as it has not reached the water.

“It's taking longer than I calculated.”
This page is actively being worked on and may not be completely correct. Please assist in making this page accurate.
Update numbers; Look into https://www.reddit.com/r/Warframe/comments/s4tmbf/accurate_eidolon_damage_and_a_convenient/ to see if we can update the DR calculation on Eidolons

Eidolons' shields and health possess DR that scales depending on your weapon's DPS.[1] DPS is calculated by:

Due to the Teralyst possessing both Alloy Armor and Robotic health, weapons with

Radiation damage will do the most damage (+75% vs Alloy Armor, +25% vs Robotic), whilst

Puncture will also be reasonably effective (+15% vs Alloy Armor, +25% vs Robotic). Avoid using

Corrosive Projection is recommended to decrease the Teralyst's armor.

Shield Disruption has no effect on its shields. Bear in mind that the Teralyst is immune to all Status Effects, except for

Weapons with a high damage to ammo ratio are recommended. Snipers and shotguns are ideal for this purpose. Explosives are ineffective on the weak points as they will hit the invulnerable body and deal no damage, unless the projectile can make a direct hit on the weak point and explode there. Shotguns that fire projectiles, such as the

Arca Plasmor, can be ineffective, since the weapon's damage will not register if any part of the projectile misses the joint.

Cosmic Crush is effective at gathering the Eidolon's loot.

Dispensary to spawn a reliable source of energy orbs, and bring an Operator with

Wellspring. Bringing along an Ancient Healer Specter and equipping

Arcane Nullifier can be used to negate the

The Teralyst is immune to all debuffing effects of Warframe powers. Therefore, highly defensive and/or self/squad buffing Warframes such as

Void damage, have no effect on the Eidolon Teralyst shields.

Some Warframes are well-equipped to fight the Eidolon Teralyst for the utility they bring to the squad:

During any phase of the battle, players can bring Eidolon Lures into the battle and charge them by either letting them absorb three Vomvalysts in their spectral ethereal form, or by picking up the energy orb they drop (indicated by a blue beacon) and passing it onto the Lure. Once they are charged, they will glow blue, their waypoint will change from yellow to blue, and if brought near the Teralyst they will prevent it from teleporting away.

The Teralyst possesses a Sentient shield which is invulnerable to all sources of damage, it can only be harmed with

Void damage which can only be utilized by the Tenno Operator (which is unlocked after finishing the War Within).

If depleted, the Eidolon's joints — Teralyst Synovia — will become vulnerable to all forms of damage, not just

Void damage, but damage resistances still apply. Note that their shield can still regenerate after a moderate delay if not taking any damage.

If one of their Synovia joints has been destroyed, it will drop an Exceptional Sentient Core. The boss will then retaliate by emitting an Energy Spike — which is a massive

Magnetic pulse expanding up to 60 meters away — and then teleport away from the Tenno and recovering 75% of their shield.

Once two weak points have been destroyed, it will begin two new attack patterns while modifying the aggressiveness of the Vomvalysts.

Once three Synovia joints have been destroyed, the Teralyst will attack more frequently and aggressively, and Ground Stomp will be followed by a slower damaging blue ring. The Vomvalyst spawn rate will increase notably.

Once all four Synovia joints have been destroyed, the Teralyst will drop down and summon a school of Eidolon Vomvalysts in their ethereal form to merge with it. Each Vomvalyst that merges with the Teralyst will heal it. The players should intercept and kill as many as possible. This phase will end automatically after approximately 30 seconds.

In this phase, the Teralyst will not regenerate its shields and can be killed entirely. Their attack pattern closely resembles the pattern of the third phase.

Once the Teralyst dies, it will drop to the ground, dropping an Eidolon Shard as well as one of the

If successfully defeated while tethered by at least two charged Eidolon Lures, the Teralyst will be captured. The lures will self-destruct and yield an additional four Intact Sentient Cores, two Exceptional Sentient Cores, a Flawless Sentient Core, and a Brilliant Eidolon Shard; all of which drop from the lures and not the corpse of the Teralyst. To know that the requirement of capture is fulfilled, listen for Quill Onkko's comment: "Sentient energy contained". 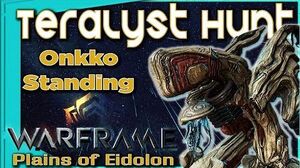 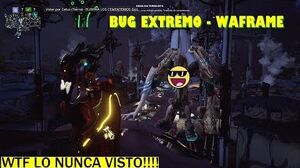 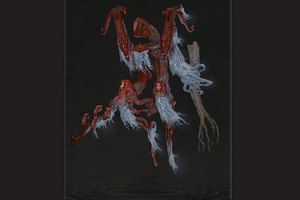