Corpus sidearm. Compared to its single-handed counterpart, the Dual Cestra sports even faster fire rate, and no spool-up, with a larger magazine size and ammo capacity, at the expense of slower reload speed and lower accuracy.

The Dual Cestra's blueprint can be researched from the Energy Lab in the dojo. 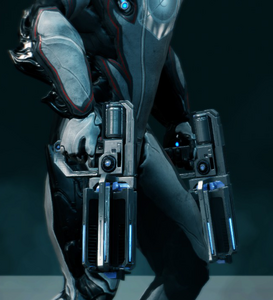