https://www.warframe.com/droptables
Draga are the simplest and most-common of the aquatic enemies which can spawn in underwater areas of the Grineer Sealab tileset. They wield the

Harpak and usually move fairly slowly through the water, though they will move faster upon spotting a player. 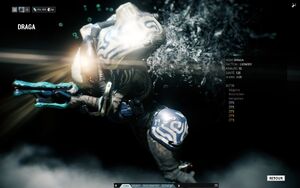 Draga in the Codex