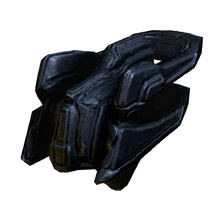 The Dissic Scaffold is a scaffold used in Amp construction, that allows the weapon to perform an alternate secondary fire function (default Mouse3 ). The Dissic fires a lobbed projectile that explodes on contact with the environment or an enemy and splits into multiple smaller explosive projectiles that fly outward away from the initial explosion.

‍3,000 standing and requires a rank of Hand to purchase. It is also a possible rank-up reward for advancing to ​Hand​ with Vox Solaris.

Retrieved from "https://warframe.fandom.com/wiki/Dissic_Scaffold?oldid=2110292"
Community content is available under CC-BY-SA unless otherwise noted.