You might have Limboed over to this Devstream Overview for a look at what the Rift-Walker’s rework entails, but this episode had a lot of cover and reveal.

Want a look at the new Photobooth Tool (real name to be determined), Chroma’s Deluxe Skin, Helminth Model, and more? You can see them live on our YouTube Channel! If you want all the juicy details without having to use more than one sense, plug your nose and read our overview below:

TennoCon 2017 is happening on July 8 in London, Ontario, Canada! Ticket and hotel details will be released when the tickets go on sale on Thursday, February 23. It’s only 140 (- n) days away - we hope to see you there, Tenno!

Our Fan Channels are hosting a 72 hour Charity Stream on https://twitch.tv/warframefanchannels! It started right after the Devstream and will be going until Monday, Feb 20, at 3pm ET. All money raised will be donated to ExtraLife! Be sure to tune in and show your support.

Whispers about Limbo’s rework have been echoing around in the past few Devstreams, but this episode was the first time we get to show you it in-engine! A picture says a thousand words, so I can’t even imagine how many words a video would say; while reading about his new mechanics is great, I highly suggest you watch them in action at this timestamp.

Everything we’ll be discussing here is a work-in-progress and subject to change as we move forward with playtesting and balancing. Don’t worry – an Augment audit will be had once everything is solidified.

Alright, let’s take a look at his new kit:

We are adding a new Photobooth tool to let you bring your Fashion Frame to a whole new level! Create your own dioramas in a variety of maps. All of your Warframe abilities and weapons will still be available, but we’re giving you the ability to pause or slow time, or even advance it frame by frame to get the ultimate shot.

On top of that, you’ll be able to apply filters, adjust your FOV, depth, and distance, etc. - lots of photo editing tools are being built-in to help you capture the best visuals that Warframe has to bring. Here’s a gif of Rebecca showing it in-action:

(you can see it more in-depth at this timestamp)

And a screenshot created with this tool: 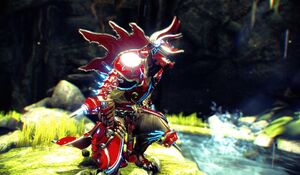 Why yes, that is Chroma’s Deluxe Skin. Isn’t it gorgeous? It’s slated to be the next Deluxe Skin released, so keep an eye on the Market for when it appears!

He’s also coming with a 2-handed Sword Skin, which you can see here: 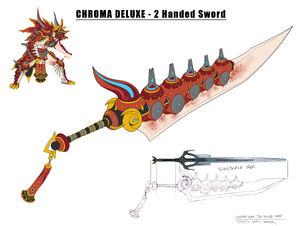 The final iteration of the Helminth Charger remodel is complete! We have no ETA on when it will appear in-game, but you can see what it’ll look like here: 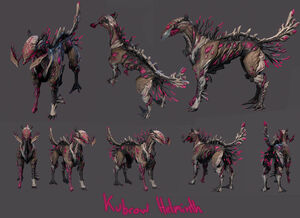 The below gif showcases the room you’ll need to build in your Dojo to be able to access the coming Enemy Cells system. Any progression you make to take down the King Pin will be reflected here for all of your Clan mates; this will be a collaborative effort, not something that you take on by yourself (unless you’re in a Solo clan, that’s cool).

Several different approaches will be available for you to take down the Kingpin, but Clans can go down several branches through coordination with added benefits.

Clans are also going to have ranks in the future, which will determine what kind of Enemy Cells you can go after. Activity within the Clan determines your rank: the more Cells you defeat, the more Structures you build, the more Research completed, etc. – all of these contribute to your clan’s Affinity, which will retroactively be added to your rank when this is implemented.

If you want more details on the Kingpin system, you can hear what Steve has to say about it at this timestamp. 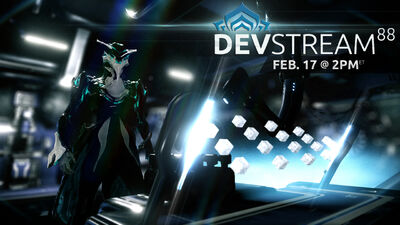 Join us this Friday, February 17th for Devstream #88!

Who: Join the usual crew on the couch: Rebecca, Steve, Sheldon, Scott, and Geoff!

What: We’ve been talking about Limbo and our plans to revisit his powers for several months – it’s time to show what progress we’ve made! If you’ve taken the time to play and learn Limbo and want to see how your build (or a style of build) works, please leave a comment that says you’re interested in having your account demoed! Limbo won’t steal the whole show, though – we’ve got lots more to discuss and share about TennoCon Tickets! Don’t miss it!

When: Join us this Friday, February 17th at 2 p.m ET! (http://www.thetimezoneconverter.com/)

If you have questions, post them below! This thread closes at 10 a.m. on February 17th!

Retrieved from "https://warframe.fandom.com/wiki/Devstream_88?oldid=1836702"
Community content is available under CC-BY-SA unless otherwise noted.