There were some new faces on the couch today (and a somewhat familiar one in the bushes) for Devstream 87! Tom and Dave from the AI & Enemy Design team joined Rebecca and Steve to discuss upcoming changes to enemies, both big and small.

This stream had a lot to do with discussion and gameplay, so I recommend watching the stream to get the full effect. If you just want the details without having to use your eyes AND ears at the same time, keep reading on for the TL;DW version below.

Let’s get this out of the way:
How. Awesome. Is. This?!?
There are no details on what her abilities actually do, but they sure do look cool.

The model above was made many moons ago for Nef Anyo, but not much has come of it. The original plan included a huge platform that he moved around on, featuring a tricky magnetic field that players had to find out a way to turn off.

With Kela de Thaym's rework, as well as our two cinematic quests, our neon-bearded friend got pushed to the side. There are other bosses mentioned during this stream who are currently being worked on, but that does not mean he is forgotten. One day, the Tenno will face him in battle. In the meantime, let’s take a look at what menacing foes are awaiting you in the more definitive future.

If you have ever ventured to Lua, you might have seen a Sentient pick up one of its brethren’s blown off arms and use them, with different abilities depending on the type of enemy. We want to expand the powers and weapons used by the existing Sentient forces as we further develop this faction.

Part of this development includes a new enemy: the Sentient Carrier. While not an active combatant, this foe’s role will be to pick up the spark dropped by killed Sentients and use that to create a new one. If you want to avoid a Battalyst army, be sure to take out this guy first. 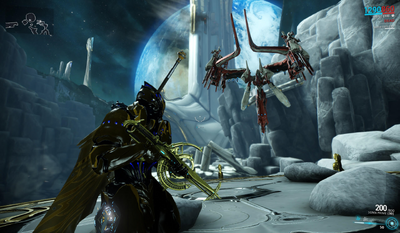 Above is an idea of what this new Sentient would look like. Please know that this is a very early prototype and we are still working on its exact implementation — like all other Sentients, we want to make its abilities and behavior different from the other Factions you see, while ensuring it supports and complements what the Oculyst and Battalyst are capable of on the battlefield.

Listen to the full discussion on this here.

Eximus units were implemented to be a mini boss — if you are a low-level player who hasn’t mastered the art of min-maxing, this goal is still mostly true. But these enemies are turned into mob fodder at higher levels, and our team is looking at how to add challenge back into their mechanics.

A proposed, work in progress change is to have a certain percentage of these foes spawn with weak points. They might be invulnerable (or in hindsight highly resistant to) to damage (but still susceptible to Warframe abilities – like Titania’s 1) until these points are destroyed. These kinds of units will only appear with high-level content (no number has been released) and will scale with the enemies’ difficulty.[1]

As the section title implies, this new mechanic would be limited to the Infested Faction. As we move forward with this concept, the balance between risk and reward will be at the front of our minds.

Listen to the full discussion on this here

The Ambulas is getting a new look – and a boss battle! This new model and mechanics is an evolution of the Bursa; it has thick armor plating that players need to destroy in pieces to be able to damage it.

There are no confirmed details on its attacks, but the boss fight will be similar to the Raptor’s. Players won’t be focused on defeating a singular boss, but rather a group of Ambulas with a larger objective. 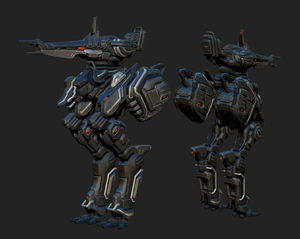 Part of this objective will be preventing the Ambulas from being picked up by the new Corpus Drop Ships (pictured above) and distributed throughout the Origin System. These new ships will also be implemented in open-air/world maps as a new spawning mechanic — enemies will be dropped from the sky instead of spawning in unseen hallways and corners.

Like the Infested Crawler, we wanted to create a Corpus unit that forces players to aim towards the ground once in a while. Much like the Drahk and Hyekka Masters, these Mini Hyenas will be spawned by a Fabricator that is thrown down by Summoners. The bonus here is that you can destroy the Fabricator to prevent them from spawning!

A full look at this new feature (including placeholder mini Hyenas – so cute!) is available at this timestamp.

There are no plans for adding any new Trials to the existing 3, but our team is always working to remove exploits and bugs from the existing missions. If you don’t know what the trials are, they are 8-man missions that require teamwork and coordination to complete puzzles (and, once you’ve done them enough, to see how fast you can speed run through them).

If we were to add more of these missions in the future, adding Operator mechanics to the challenges is something we want to look into.

With colonies revealed during The Glast Gambit update, we are looking into new ways to incorporate peaceful NPCs into our missions. As a result, a new gamemode is coming soon to PC: Defector Rescue!

Grineer defectors have answered a distress call in space, only to be overcome with an extremely aggressive Infestation. When the Tenno arrive, they learn that the defectors have sealed themselves inside safe areas of the ship; as soon as they leave, they slowly die from Infestation.

Scattered throughout the ship are healing stations that the defectors can use, but only if the Tenno keep them powered up. Protect the defectors from attack and keep these stations powered to give them a chance at reaching extraction alive.

This new mission type will appear randomly in your Navigation as an Event. These defectors won’t always be around, but when they are, be sure to lend a hand as this new mode will involve Leaderboards! It’s not just about saving people, it’s also about bragging rights.

As an endless-type mission, players will be able to customize the difficulty of their quest by unlocking segments of the ship. More segments means more defectors being rescued at once, but it also means there are more of them to protect! Don’t let too many die or you might be shamefully forced to extract.

Potential features of this new mode will also include more damage being dealt to the defectors over time, growing poor visibility due to Infested clouds, the appearance of minibosses, and more.

A WIP look at this new gamemode is below — but beware, Tenno. Rebecca was (accidentally) channeling her love for RE7 during this section, so this timestamp might be 2spooky4u!

The Syndicate Assassination system was mentioned before The War Within was released back in 2016 as a part of our larger goal to Make Clans Great Again. Last Devstream, we discussed the King Pin idea more in-depth, but here’s a closer look at what this could hold for clan mates everywhere (and only clan mates, as this screen is accessible only in your Dojo): 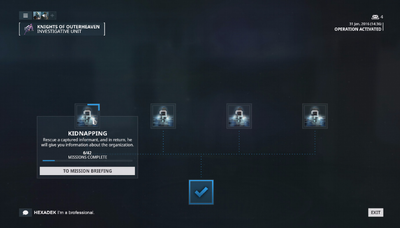 The plan is to generate an Enemy Cell from a random faction with a procedurally generated King Pin — the size of this organization will scale with the size of the Clan. To take these guys down, you will need to work with your clan mates to uncover their inner structure and take them out piece by piece.

Unique Faction units will be tied to these cells, and each Boss will have their own unique invulnerabilities, weaknesses, abilities, defenses and more. Warlords will be able to modify some of the missions to tailor the takedown of the King Pin to the Clan’s strengths.

But watch out — the Stalker isn't the only one who can hold a grudge. Every time you uncover info or act against them, they’ll retaliate. Squads will be sent after clan members, your Dojo will be attacked, etc.

We’ll reveal more details as this system is fully fleshed out, but you can hear all that Steve has to say about it here

Throughout the stream, the team talked about Boss Fights and our approach towards them in Warframe. From a design standpoint, they are the reward for the player, a spectacle even, in comparison to the regular mob grinding gameplay.

When planning a boss fight, we focus on a few things: escalation, narrative, and how they fit into the environment. A huge challenge to overcome is ensuring that they last more than 5 seconds against players and their 17-Forma’d Tonkors. As a result, Invulnerability phases were introduced, but we’re always looking for creative ways to add challenge without removing your ability to damage them outright.

One approach we use is having the boss fight involve more than one enemy – like the Raptor, for instance. Another way was showcased during The War Within with the Operator gameplay. The changes to your Focus powers introduced in that quest helped you interact with foes in new ways while adding a new uncomfortable feeling: the feeling of being vulnerable.

I won’t add any more details to avoid spoiling the experience for anyone, but know that this timestamp includes spoilers.