The War Within is out on PC, which means it’s time to talk about everything that went into releasing this monumental update. We discussed things from the quest, so if you do not want to be spoiled, either take extreme care or click away. The non-spoiler content is listed up at the top, and there is a warning before the reveals from the update, but journey forward at your own risk.

If spoilers aren’t your concern, feel free to read on, or get all the details (including developer reactions and commentary) live during the stream.[1]

Eric joined the crew on the couch to showcase all the lighting changes that came with Update 19, including the awesome new volumetric improvements that contributed to the atmosphere and overall feel of the quest. He came with three tilesets to share, two being from The War Within (i.e. spoilers!): the Cave and the Kuva Fortress.

The third is a showcase of the lighting team’s work on old tilesets, which is slowly being done between updates. The feel effect of the pollution on Sedna will be revealed in a few weeks, but here’s a sneak peek at what’s to come: 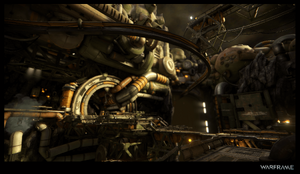 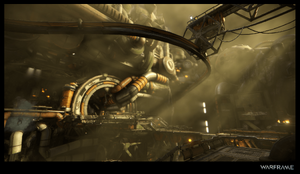 THE WAR WITHIN QUEST SPOILERS AHEAD

We addressed a lot of community feedback with two Developer Workshops this week, which has now manifested itself in some huge new changes for the Riven system. Keep in mind that these changes are still in-line with our ultimate goal for this mechanic, which is to shed new light on forgotten gear, and not to give power to already-popular weapons. With that out of the way, let’s take a look at what is coming:

You can see these changes in action during the stream here.

Cycling a Riven Mod will no longer require you to Unveil it again – its stats will be visible the moment you spend your Kuva. You will also be able to choose between the old stats or the new ones when Cycling, in case your results aren’t what you hoped. A Cycle Counter will also be added to the Mod’s UI to allow for transparency in Riven trading as well.

Finally, Kuva costs have been lowered! They are no longer exponential, but will still increase (just not on such a steep curve). The real numbers and more can be found in Part 2 of our Riven Mods Developer Workshop.

Geoff, our Animation Director, was joined by another member of his team, Tim Serkis, to show off what went into making the cinematics for The War Within quest. After the script and VO is finalized, Geoff plans out rough camera placement and posing to stage out the scenes. Tim, in his trusty mocap suit, then acts it all out.

This is the result:

Geoff also shared some of the incredible wrinkle and face work done by his team, which you can see here (or see it live on stream, with bonus Developer reactions).

With the new Operator system in The War Within, lots of fans had questions about what is to come with this new mechanic. Here’s a quick rundown of our answers:

You will be able to pet your Kavat/Kubrow as the Operator in the future.

We have said it before, but we will confirm that Focus 2.0 will be coming in the future. This system has remained largely untouched up until now as a lot of its changes hinged on this new Operator functionality.

We are looking into adding new ways to use Transference in-missions, but nothing concrete is to be said (the Golden Maw may be making a reappearance, but no promises!)

With the new quest, we also added a Morality System. Turns out, 37% of you like living on the edge (i.e., you are aligned to the Moon). If you feel like you made the wrong choice, you will have the opportunity to move the needle in the future. The choices you make with this and the Focus system will let you discover more of the story of the Tenno’s origins.

Sarah from our QA team also shared some incredible bugs that the team came across when testing the update before it went live.

For those who dare, you can see them here. 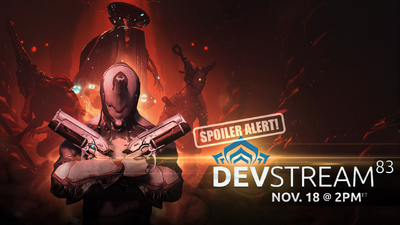 Last week I mentioned we were postponing Devstream #83 because we figured 'that it'd be a much more informative stream once everyone has had time to play the Update (on PC) and we've had time to sleep and get reactions'. At least half of that is true (the reaction half), so we're ready to bring you Devstream #83!

Join us this Friday, November 18th for a Spoiler-Heavy Devstream #83!

Who? Members of the Digital Extremes Team!

What? Warframe's 'The War Within' update is live on PC! Go behind the scenes as the Warframe Development team showcases and discusses the biggest update of the year! We'll also be taking questions from you and reviewing stats on what choices Tenno made throughout the quest.

If you have questions, post them on this thread, which closes at 10 a.m. on November 18th.

Retrieved from "https://warframe.fandom.com/wiki/Devstream_83?oldid=1437258"
Community content is available under CC-BY-SA unless otherwise noted.