We just revealed our “Are You Ready?” campaign for The War Within this week, so this Devstream focused a lot on how both players and developers should be preparing for this next major update. A lot of the joy of this episode came in showing off what awaits you on the Grineer Fortress for missions and level design, so I highly suggest you watch the actual stream here.

If you want an idea of what to expect (Grineer Fortress Tileset, Endless Relic Missions, & more), or you simply want the TL;DW version, keep reading below.[1]

Come see us at PAX Aus! The Devs will be holding their own Warframe panel on Saturday, November 5th at 3 pm AEDT. Steve will also be participating in a “Future of PC Gaming” panel on Sunday November 6th, at 12:30pm AEDT.

For those of you who don’t live down-under, you can catch both of those streams live over at http://twitch.tv/warframe !

Yes! It’s a thing! PC players can hopefully look forward to this ability next week. 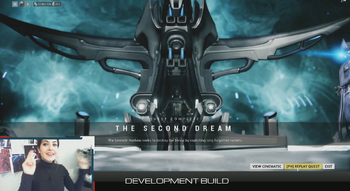 Things to look for in The War Within[edit | edit source]

We realize that a large part of the old Void system was removed with the Relic system: endless missions. To remedy this, we’re adding the ability to use multiple Relics in endless missions. As demonstrated with Defense: Every 5 waves, you will be given a chance to pick your Reward from your equipped Relic. If you battle on, you will get to equip a fresh Relic while seeing the choices of your squad mates as well. 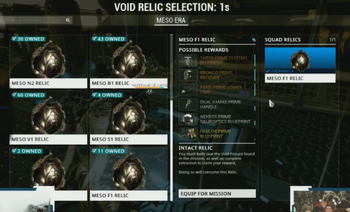 Every 5 Waves will refresh your reactant count, so make sure you pick them up! The number of Traces rewarded will increase the longer you stay in-mission as well.

Hopefully this system will be released with The War Within.

We showed off our new Fortress tileset, which will be unlocked after you complete The War Within. Tenno will be able to run through the new Assault missions, which are officially the longest game modes (other than endless ones). Players must save a colony of civilians from being blown sky-high by the Grineer, requiring them to pass through multiple stages to accomplish this feat.

More details (and visuals) are revealed in the stream for those who want to learn more. 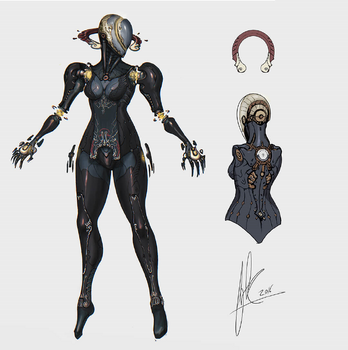 We revealed a new Deluxe Skin for Mag! Our character artist, Ray, sculpted it live on Stream to give players an idea of what goes into the creation process!

These items have now been accepted and will appear in-game in the coming months:

Congratulations to everyone whose submissions were chosen!

We are currently working on HDR Support for Xbox One, which will hopefully pave the way for HDR on PS4 Pro (and HDR Desktop Monitors to come?). Either way, consoles should see overall performance improvement including frame rate, better resolution, better graphics and more.

In the coming Console build, look for volumetric lighting and fog, as well as frame rate and VSync improvements (especially for Xbox One Tenno). 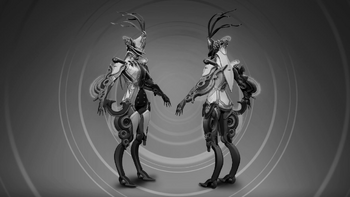 Chat had the chance to pick the new default colour scheme for the upcoming ‘Bard’ frame to help differentiate her from Banshee. Stay tuned for the final version.

Other changes have been made to her abilities, were you will able to compose small melodies using a step-sequencer that will be integrated into your power set.

Long answer: In the original implementation of Relics, Alert-only Relics were considered, offering unique non-Void rewards. At the moment, there are no plans to use this system.

Join us this Friday, October 28th for Devstream #82!
Who: Rebecca is joined by Steve, Sheldon, Geoff and Scott!

What: We have many a splendid thing lined up for today's Devstream! As always we will include a Q&A session, but we also have:

When: Join us this October 28that 2 p.m. EDT! Time Zone Converter: http://www.worldtimebuddy.com/

If you have questions, post them below! This thread closes at 10 a.m. EDT on October 28th.

Retrieved from "https://warframe.fandom.com/wiki/Devstream_82?oldid=1455273"
Community content is available under CC-BY-SA unless otherwise noted.