For this week's Devstream, I hope you got your pencils ready (Rebecca sure did). In this episode, we took a hard look at Warframe's core gameplay and discussed them in-depth, including how they relate to future updates and changes. Didn’t take notes, or missed the reveals of Ayatan Sculptures and other long-awaited mechanics? You can see them in-action on our YouTube channel here, or read all about it (gifs included) in our overview below.[1]

As always, look for the 24 hour alert after the Stream and get your hands on a Catalyst! The Silver Grove is live on Consoles.
TSG Update 2 is on PC, bringing with it 6 shiny new Syndicate Melee Weapons.
Come to our EGX Party: TENNOVIP. Last tickets up TODAY – get yours now!
New Contest: Cinematic Moments
Second Stream Podcast after the show with community perspectives on what we talk about here today. AGGP, H3dShot, TGDM.

Since the update to the Fusion system, players older than 100 days have started using it 6% more, with the number of ranks being achieved increased by 25%. But that’s just the beginning. We’ve talked before about Endo Part 2, and in this episode, we helped you visualize just what to look for in this treasure hunt.

Ayatan Sculptures are Orokin artifacts powered by Endo. You can find them in crates and lockers in the Void, but they can also be acquired in weekly missions from Maroo. Pieces of them are scattered across the solar system, but if you complete one, you can place it on your ship. Those of you looking for profit in place of treasure can sell a completed one or their components to Maroo for Endo. Full details are available in this blog post.

This system is the first step towards integrating mechanics into already-existing systems, like Maroo’s Bazaar.

We have a lot of existing primary weapon classes: Rifles, Bows, Beams, Launchers, Snipers, Shotguns, Crossbows, Laser Cannon, Blade Launchers. It's been a long time since we've added a new one. So here it comes: Spears Guns!

Spear Guns were teased in past Devstreams, and it’s taken a while to get here. Not because we don’t want to ship it out, but because adding unique new content has gotten a lot more difficult than it was in the past. New weapon classes require new animations for every Warframe, in both Noble and Agile Stances. Work is being done now to tackle this mountain of new Idles, which you can see below:

(want to see them all? check ‘em out in this handy imgur album)

This overview is guaranteed free of vacuum puns. Those who watched the Devstream were not so lucky. Why all the Dyson jokes? We’re adding Universal

What we're playing with right now is this idea: Vacuum will be transformed into 3 new mods that can be used by any sentinel, with 3 different types of Vacuum:

Carrier and Carrier Prime will now be given a new precept, which buffs your Ammo Capacity (increasing with the precept level). Unused ammo types will be converted into the ammo of the currently equipped weapon over a small period of time.

The War Within is still in development, with Operator Voice Overs being edited, and table readings of the quest script (the 7th!!! and final version) happening behind closed doors. When it’ll come out, we can’t say – we’re trying to ship it out this month, but it’ll be close! 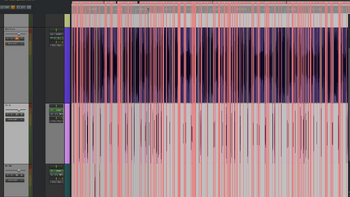 We hear you! We really do. Endgame is being looked and, and we’re working on new systems to add more challenge, while revisiting old ones. Rebecca pulled some stats and discovered that Akkad was the most played mission – but not as endless Defense, as an in and out kind of run. There’s something missing, and we know this and are trying our best to fix it.

Part of our approach to adding more Veteran-friendly content includes a new VIP Syndicate Assassination system. Play a Warframe hitman, where you must hunt down specific VIPs that are custom to you. Each will be challenging and rewarding based on your level – but if you fail, things will only become more difficult. If your target isn’t taken down within the allotted time period, you lose Syndicate Standing. Under pressure, Tenno?

For those who want to keep their hands clean, Rescuing VIPs will also be an option. Stay tuned. 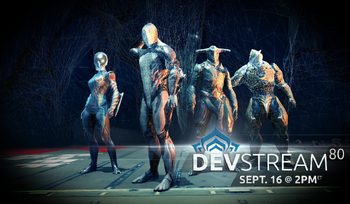 Join us this Friday, September 16th for Devstream #80: Back to Basics (and school)!

What: This Devstream will be going back to Warframe basics. With all these Directors present, it'll be time to take a look at some of Warframe's big picture areas. Updates are our life blood, but so is a satisfying core gameplay experience. We'll be covering both these topics in detail on the stream, don't miss it!

Prizes? Why yes, we will be giving away 3 x 1000 Platinum Prizes and a MYSTERY PRIZE during the Livestream!

When: Join us this September 16th at 2 p.m. EDT! Time Zone Converter: http://www.worldtimebuddy.com/

If you have questions, post them below! This thread closes at 10 a.m. on September 16th.

Retrieved from "https://warframe.fandom.com/wiki/Devstream_80?oldid=1645270"
Community content is available under CC-BY-SA unless otherwise noted.