Devstream #79 came hot on the heels of The Silver Grove on PC, and the Devs took this time to dive into all the awesome new content that came with it. Were you too busy playing the update to catch all their antics? Don’t worry – you can see it live on our YouTube channel here. If you want the rundown on The Silver Grove and other upcoming content, you can read it all below.[1]

Due to The Silver Grove update, we were unable to make it to Gamescom this year, but keep an eye out for the team PAX WEST! Our panel will take place on Sunday, September 4th at 6pm. There will be no Devstream that week, but we’ll be streaming our event live!

Titania, the newest Warframe, has come with her own quest. To start, you must have finished the Second Dream – after that, simply take a walk in the relays to chat with New Loka. We won’t disclose any more to prevent spoilers, but if you’re looking for the Dusklight Sarracenia, make sure to search for Al Gore’s worst enemy: pollution.

PC Tenno who started up Warframe after the Silver Grove would have seen all their Fusion Cores turned into Endo upon login. This new resource and the new system have been detailed in our Dev Workshop here. Below, see some important tidbits you might have missed from this Stream: 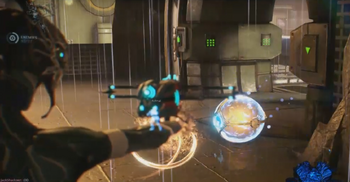 Art for the Zephyr Deluxe Skin has been released, featuring Energy Wings that appear when you’re airborne. (i.e. during a bullet jump or flight) 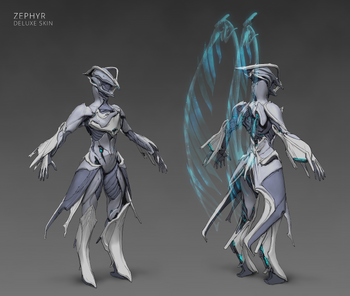 The Syndicate Melee weapons we revealed last Devstream are coming, but not without their own quirks! Like the Heliocor, we are planning on adding functionality on top of the regular stat changes for this content. The Design Council is currently sharing their feedback on this project, so stay tuned for more updates!

There were a lot of community questions and Dev comments about Cosmetics, so we’ve listed them all below for you:

What with the TennoGen program letting us share some incredible community creations, we wanted to clarify some things about DE-made cosmetics – especially alt helms. The current system has been to make two alt helmets for each Warframe. The only Warframes without that number are the newest ones: Ivara, Titania, and Inaros.

That means that TennoGen has not cut into any of our production plans for cosmetics, just that they are bonus content for players to enjoy and to reach that end-game level of FashionFrame.

With every (almost) Devstream, Prime Time, and social media post comes the question: Umbra? We have no promises about when it’s coming, but it’s still coming! Our update schedule has shifted, meaning that its release date has been altered as well. What we can say is that it is coming after The War Within, as the third installment of our cinematic quest.

With all the amazing contributions by our fans through TennoGen and the Codex Art Contest 3.0., here’s a rundown of when you can expect this content to appear in the Market:

Other Points of NoteEdit

Join us this Friday, August 19th for Devstream #79!

Who: Rebecca is joined by a crew of possibly sleepy but very excited Devs!

What: (Hopefully) hot off the release of major Update Part III: Update: The Silver Grove, it's time for us to take a look at the list of content just shipped on PC and discuss it! We'll also spend some time looking to the future on what awaits you in Part IV of this Update 19 Tetralogy!

When: Join us this Friday, August 19that 2 p.m. EDT! Time Zone Converter: http://www.worldtimebuddy.com/

Retrieved from "https://warframe.fandom.com/wiki/Devstream_79?oldid=1383266"
Community content is available under CC-BY-SA unless otherwise noted.