TennoCon has come and gone, but the Devstream crew is here to stay. This week, they discussed some of the reveals from TennoCon itself, upcoming changes post-Specters of the Rail, and a timeline for the rest of the 3-Part-Update on both consoles and PC. Couldn’t make it to a live viewing? You can watch the broadcast on our YouTube channel, or you can read all the important details down below.[1]

Specters of the Rail has been out on PC for a couple of weeks now, and PC players can expect more hotfixes for this update in the future. Console Tenno should keep an eye out for SOTR in August once all of the major bugs have been squashed. As for the final installment of the 3-Part-Update, PC players will see the release of The War Within sometime in August. After seeing the effects of a rush with Specters of the Rail, we want to ensure that we’re satisfied with the big cinematic update before we ship it out!

After observing the new Void system in the wild for a few weeks, we’ve decided to make a few changes to Relics and Void Traces to improve player experience. Your Void Trace capacity will now increase with your Mastery Rank: the starting amount will stay at 100, but each Mastery Rank will earn you space to store an additional 50 Traces. MR 2 will be able to hold 150, MR 3 will have 200, and so on.

With the Re-Vaulting of Mag Prime coming in the future, we want to clarify how the new Relic system will work as well. The Relics with the vaulted drops will remain in player inventories, meaning they can still be farmed after the vaulting date, but the Relics with those drop tables will no longer be available in-game. For new Prime releases, new Relics will be introduced into the system with updated Drop Tables.

As Relics are consumed faster than Keys were, we are looking into ways to make them more easily obtainable as well. They already exist in more drop-tables than Void Keys, but lower-tier endless missions may soon be an additional source for farming them, as well as Eximus enemies, allowing for players to engage in a more targeted-grind for loot. To further simplify the acquisition of Relics, we will also be publishing the drop tables for each one either on the forums or in-game in the future!

Since its release in Specters of the Rail, we’ve been getting tons of awesome feedback about the Void rework and decided to make a few tweaks to the new system. Instead of the fissure being a mini-game that interrupts your mission, Void fissure alerts will now randomly spawn fissures throughout the tile as an added challenge to the gameplay. These fissures will corrupt enemies around them, on top of spawning corrupted enemies of their own. These transformed enemies will be more powerful than those found in the mission, and this buff will scale with the tier of your Relic.

Now that there’s so many fissures, you won’t have to run around like a chicken with its head cut off in an effort to seal them all. Reactant now is used to open your Relic, which you will gather by walking over it (or hoovering it up). After amassing 10 Reactants, your Relic will explode and the energy released will either bless you with a random benefit for a short time.

Nekros’ Desecrate is being made into a toggleable ability! Bodies within a certain radius of Nekros will drop that precious loot after remaining in the ability’s range for a few seconds. We are still working on the prototype, but ultimately it now allows for Nekros players do passively Desecrate the dead as they focus on other things, like making more things die!

With new game mechanics being revealed in the War Within Teaser at TennoCon (you can watch it here for yourself if you missed it), new customizations for the Operator will be released soon: 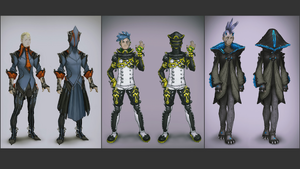 This weapon was revealed during in the past, but Geoff brought some awesome footage of a new Gunblade Stance that will be released with it! These combos aren’t set in stone, but they should give you an idea of the gunblade’s feel in-game.

With the Archwing rework from Specters of the Rail, some players have found things a bit disorienting. To remedy this gut-wrenching side-effect, we’re looking into a few changes to make sure it’ll be smooth-sailing from here on out. One option includes a toggle in the Archwing keybindings to rotate you to 'proper up' position.

Additionally, due to popular demand, we are reverting the Archwing Camera to its old (zoomed out) position.

Changes to the Fusion system have been discussed in past Devstreams, but Steve went into a little more detail about what to expect in the future. Any tweaks to how players upgrade Mods will be done to simplify this function and make it easier to understand. Visually, the components of Fusion Cores will no longer look like Mod Cards, but rather Orokin artifacts, and they will explicitly communicate how many of them are needed to reach the next rank.

Gathering up these artifacts and piecing some of them together can be used to create decorations for your Orbiter as well.

Dark Sectors will be making a comeback in the future. Players can expect more exploration out of this game mode and the ability to support clan dominance and growth within the system, using mechanics such as battling specters or deploying structures. There’s nothing definitive we can reveal right now, but Dark Sector fans can look forward to more updates soon.

The Tenno have made their mark in the Solar System, but an upcoming game mechanic can help you take this to the next level. Using glyphs, players can spray high-resolution profile icons, fanart, clan emblems and more onto the environments around them. New art is being created for this mechanic as well, as you can see below:

Who: Rebecca is joined by the usual crew for a Devstream!

What: This Devstream will cover an updated Roadmap of our 3-part Update! All platforms have Lunaro, PC has Specters of the Rail with Console release to follow soon, and now the War Within is next! What's coming with this Update? Tune in to find out! We'll also be covering Steam Workshop next Round picks, Warframe Power Tweaks, and Gameplay Updates to the new Relic and Fissures system!

Prizes? Why yes, we will be giving away 3 x 1000 Platinum Prizes during the Stream!

Retrieved from "https://warframe.fandom.com/wiki/Devstream_77?oldid=1490920"
Community content is available under CC-BY-SA unless otherwise noted.