Welcome to our Devstream 76 Overview, where we take a look at our latest developer livestream to cover those awesome details you may just have missed! With the 3-Part Update in full swing, this episode had a lot of exciting things to cover, including Archwing and Lunaro gameplay, and sneak peeks at Titania, Kavats, and the new Star Chart!

Some of the best moments are highlighted in gif-form, but if you want to see the footage in all its glory (with dev commentary included), make sure to watch it live on our YouTube Channel! Tons of juicy details were released about the upcoming Updates, but be sure to keep an eye on The War Within Hub for more news in the following weeks.[1]

TennoCon is only 18 days away! Join in all the Update hype with the best community ever – Warframe fans! All ticket proceeds go to charity, so buy yours now before you miss out: http://warframe.com/tennocon

The next major Update has been divided into 3 parts:

PC Tenno received the Part One of the 3-Part Update – Lunaro!

Lunaro is a 3v3 sport, allowing players to explore a less competitive side of the Conclave – the magic here is in its emphasis on friendship instead of violence. The mechanics of the game were highlighted in Steve’s Developer Workshop post, but we discussed some exciting changes that are coming in the game-mode’s future:

Viewers were given the first look at the in-game model for our newest Warframe, Titania! Players can expect her release with Part 3 of this major Update series.

Future Crazy-Cat-Tenno should be excited about all of the new Kavat info revealed in this stream, including the news of their release in Part 2 of the major Update, Spectres of the Rail! The breeding specialty of these space-kitties will focus on their heads and their tails, with two breed variants: Cheshire and Mirror.

Cheshire Kavats will run through a map as a distraction to draw enemy fire away from you, and their Passive ability makes them a furry good luck charm – with them around, Tenno are more likely to be touched by the hand of fortune, resulting in instant shield or energy regen, a rare resource drop, instant weapon reloads, or dealing double damage.

Mirror Kavats will provide guaranteed crits for a period of time, with a passive that mirrors their name: some of the incoming damage will be reflected back to your foes.

New mods will be introduced to help you tailor your space-cats for battle, but certain Kubrow mods will be usable for both species.

With the introduction of Kavats in-game comes changes to the companion system for Kubrows as well! Maturation of kittens or pups will become instantaneous and voluntary, meaning you can have perma-puppies or perma-kitties if you don’t mind leaving them in Ordis’ care during missions. As if the adorable-factor wasn’t reason enough to leave them in their perma-cute state, un-matured Kubrows or Kavats will also have free roam of your ship!

Steve is blowing up the Void in the next update.

Feeling better? Let’s get into the specifics:

The Void will no longer be a place locked away behind keys. Void Tears will appear across the System, still using the 4-Tier system of difficulty. The Void tileset will be instantly accessible, no key required, for all your Argon needs. What’s new is the way in which you’ll get items out of the Void, using an Orokin 3D printing technology of sorts: Projections.

These Projections are what your existing Void Keys will be transformed into – that's the current plan. A new segment will be installed on your ship, where you can hook up specific Projections based on the Prime Parts or other items you’re hoping to find.

This new system will be in place to help combat Void Fatigue by introducing new gameplay into the existing model, but to also put some control over RNG in your hands as well. With that in mind, Ducats will not be changed, but keep an eye out for Projections in Baro’s wares!

Stay tuned for a detailed Dev Workshop with more information on this change!

Archwing’s reworked movement system was debuted in this stream, but you can’t really appreciate how great it is until its release in Spectres of the Rails! To start, this game-mode will have its own keybindings and sensitivity options (as will Lunaro, sometime in the future) to help you navigate within its new 6 degrees of freedom!

The reticle (or crosshairs) of your weapon will be loose in the middle, allowing you to aim freely while remaining stationary, while moving your aim to the edges of your screen will cause your Arching to turn. Sprinting or boosting narrows the movement area (the point where you start to turn when moving your reticle) for finer control of your flight, and melee attacks will right your orientation to help you get your bearings easier in grisly space-fights.

New missions will be introduced to help you explore this movement system further. Forget the fly catching – take aim at large Courier Ships and destroy them before they get away! But be careful, your foes are armed to the teeth with turrets and guns, have sophisticated cloaking and smokescreen systems, and will release mines and troops to keep you at bay! 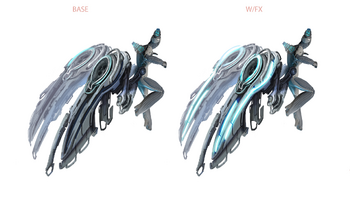 The new Healer Archwing will also be released with Spectres of the Rail!

Steve has spoken in-depth about his plans for the new StarChart, including the emphasis on linear progression to help guide new players through the Solar Map. This rework gives the Tenno a bigger role in how the System is connected.

Players must activate the Solar Rails that transport them between planets by activating the new Junctions that connect them. These areas are a place for Tenno to prove their worth within an event that has left the Solar Map in shambles – new and veteran players alike must work to reconnect the dots of the Solar System, but rewards await them in exchange for their labours.

The new Star Chart will eventually include the chance to choose your Dojo's position among the stars, with the ability link to your Dojo in the relay so people can jump in and check it out!

The War Within will require a custom movement that is 2spooky4us!

Who: Rebecca is joined by Steve, Geoff, Scott and Sheldon!

What: Did you see Steve's Dev Workshop? A major update split into Part I, II, and III – say what? Did you see http://www.warframe.com/thepath? If not – click away, because this Devstream is going to go over in more detail the exact types of revisions, changes, and additions these Updates are bringing! We’ll also be settling an age old stream rivalry with a match of Lunaro… don't miss what will surely be a demonstration of raw Lunaro prowess.

We'll also be taking your questions about the 3-part Update, so list them here or during the twitch.tv chat.

Retrieved from "https://warframe.fandom.com/wiki/Devstream_76?oldid=1490939"
Community content is available under CC-BY-SA unless otherwise noted.