Can you believe it’s been 75 Devstreams? Rebecca and the crew took it upon themselves to celebrate this milestone livestream, but they made sure to throw in some updates between the mountain of giveaways!

Didn't get join the party while it was live and want to see what it is we’re talking about? You can watch it here and see it all unfold. For those who just want the dirty details, we laid them all out below.

TennoCon is just over one month away! On May 19th, we released a bunch of exciting new updates about the event, but if you missed them you can catch up on them here!

We are pleased to announce that we will be donating 100% of ticket sale proceeds for TennoCon 2016 to the charitable organization, Outward Bound Canada supporting at-risk youth, women of courage, and veterans! More information about this amazing cause is available at their website. 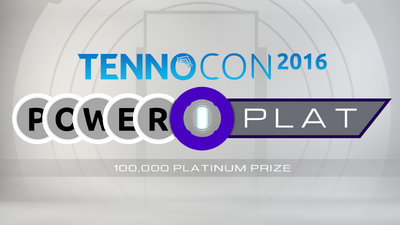 One lucky attendee will be walking away with a lifetime supply of platinum! At the event, there will be a 100,000 Platinum giveaway! 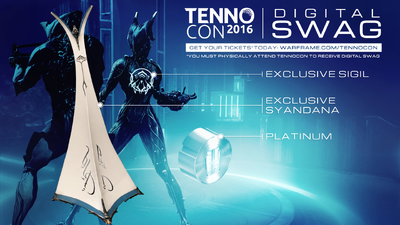 Along with platinum, event attendees will be receiving exclusive Warframe cosmetics just for walking in the door! A collector’s ticket will earn you the TennoCon Syandana and Sigil, while full day ticket holders will be walking home with the sigil!

Keith Power, the composer who created the soundtrack for the Second Dream & much more, will be joining the Developer team during panels at TennoCon! And get your Codex ready, Threshcone Prime will be making an appearance that day as well!

We talked briefly during the stream about the Update 18.13 Release. We’ve outlined the basic changes that you can expect in-game down below, but a more detailed account is available in #1, #2, and #3 on the Warframe Forums. 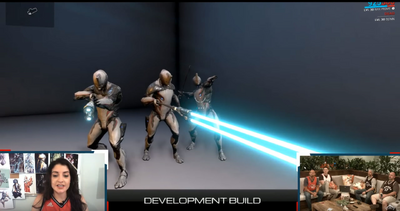 We decided to shake things up a bit for the Primary Weapons. Currently, the team is working on a Spear-Gun, which players can both shoot using the Primary Weapon fire, or throw, using their alt-fire. This new gear introduces a brand new grip-type for primary weapons, opening up new possibilities for out-of-the-box primaries, but it also means we have to alter every existing idle animation for this stance to work in-game! That being said, stay tuned!

Rebecca took a look at the new asteroid-based tileset that we’ve created for the next cinematic installment in the Warframe universe: the War Within! If you missed the trailer reveal at PAX East, this new quest will be delving into the lore behind the Grineer's Twin Queens, while introducing new enemies and mechanics into the game!

Geoff revealed animations for two upcoming Stances – one for the Tonfa:

One for dual daggers:

The dual dagger stance is being finessed for the Sai which were revealed in a previous stream!

Join us this Friday, May 27th for Devstream #75! It is our 75th Devstream and we want to celebrate with more prizes than ever before! Who: Rebecca is joined by Steve, Geoff, Scott and Sheldon!

What: Join us for this milestone Stream – can you believe it has been 75 Warframe Devstreams? We're going to celebrate with enormous prizes! Now that we are 75 streams in – we are going to go back to every 'Devstream' forum thread and find some of the most popular questions and see how things have changed from the past to today. What huge questions remain unanswered? What has changed?

Prizes? Too many to list – we are going to be not only giving away 3 x 1000 Platinum Prizes, but also Prime Access Packs! Join the Devstream fun to learn more!

P.S Love Warframe? Don't miss out on TennoCon 2016! Get your tickets at http://warframe.com/tennocon !

Retrieved from "https://warframe.fandom.com/wiki/Devstream_75?oldid=1326072"
Community content is available under CC-BY-SA unless otherwise noted.